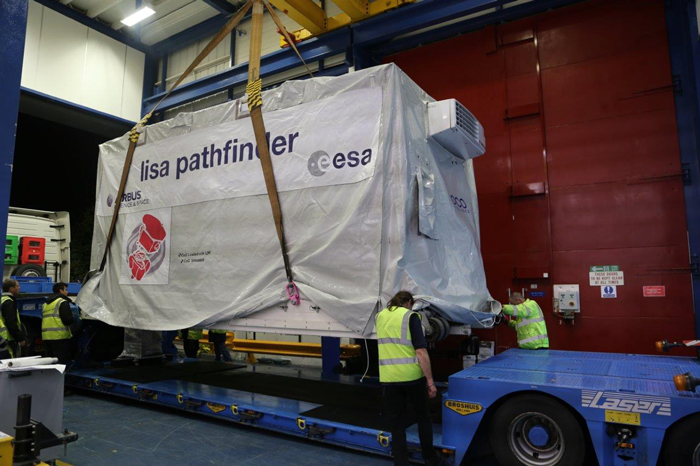 LISA Pathfinder, the European Space Agency’s gravitational-wave detection technology demonstrator, has left Stevenage ready for launch. It was shipped from the UK to Kourou in French Guiana on board an Antonov aircraft and arrived on 8 October, in preparation for its launch scheduled in early December.

The 1.9-tonne spacecraft, primed by Airbus Defence and Space, will be launched on a European Vega rocket.

In September, Airbus Defence and Space, the world’s second largest space company, completed a series of intensive tests on LISA Pathfinder’s propulsion and science modules to prove its readiness for launch and the subsequent mission.

The demonstrator carries the LISA Technology Package (LTP), which weighs around 150 kilograms. It consists of a laser interferometer measuring changes in the distance between two precision-engineered gold/platinum test masses, each weighing 1.96 kilograms.

Once in orbit around the first Earth Sun Lagrange point, 1.5 million km from Earth, the two test masses will be released from a locking mechanism and held in position with a weak electrostatic field that can be very precisely controlled. When this electrostatic actuation of the test masses is switched off, the two gold/platinum blocks will be in free fall, with no influence from the spacecraft around them.

The laser interferometer measures the relative position and orientation of the masses – which are around 40 centimetres apart from each other – to an accuracy of less than one millionth of the width of a human hair, which is less than 0.01 nanometre.

LISA technologies also include two types of tiny thrusters, so small that a thousand would be needed to lift a sheet of paper on Earth. These thrusters are to ensure that the spacecraft can counteract external forces, such as solar wind or cosmic radiation.

The mission will carry out in-orbit testing of these two micro-propulsion systems, one from Europe and the other from NASA.

ESA has selected the gravitational universe science theme for its third Large Class L3 mission, for which a LISA-like mission is a leading candidate. Gravitational radiation will allow astronomers to study our universe in a new way and future telescope systems will be able to observe exotic sources, such as colliding super-massive black holes, as never before.

LISA Pathfinder is paving the way for a future large space observatory that ultimately will directly observe and precisely measure gravitational waves. These minute distortions in space-time require very sensitive and highly precise measuring technology, the performance of which can only be tested in a space environment.

Airbus Defence and Space in the UK was chosen by the European Space Agency (ESA) to build the spacecraft and is responsible for delivering the integrated turnkey satellite. Airbus Defence and Space in Germany has been commissioned by ESA and the German Aerospace Centre, DLR, as the systems leader for the LTP, which was developed with contributions from European research institutes and companies.