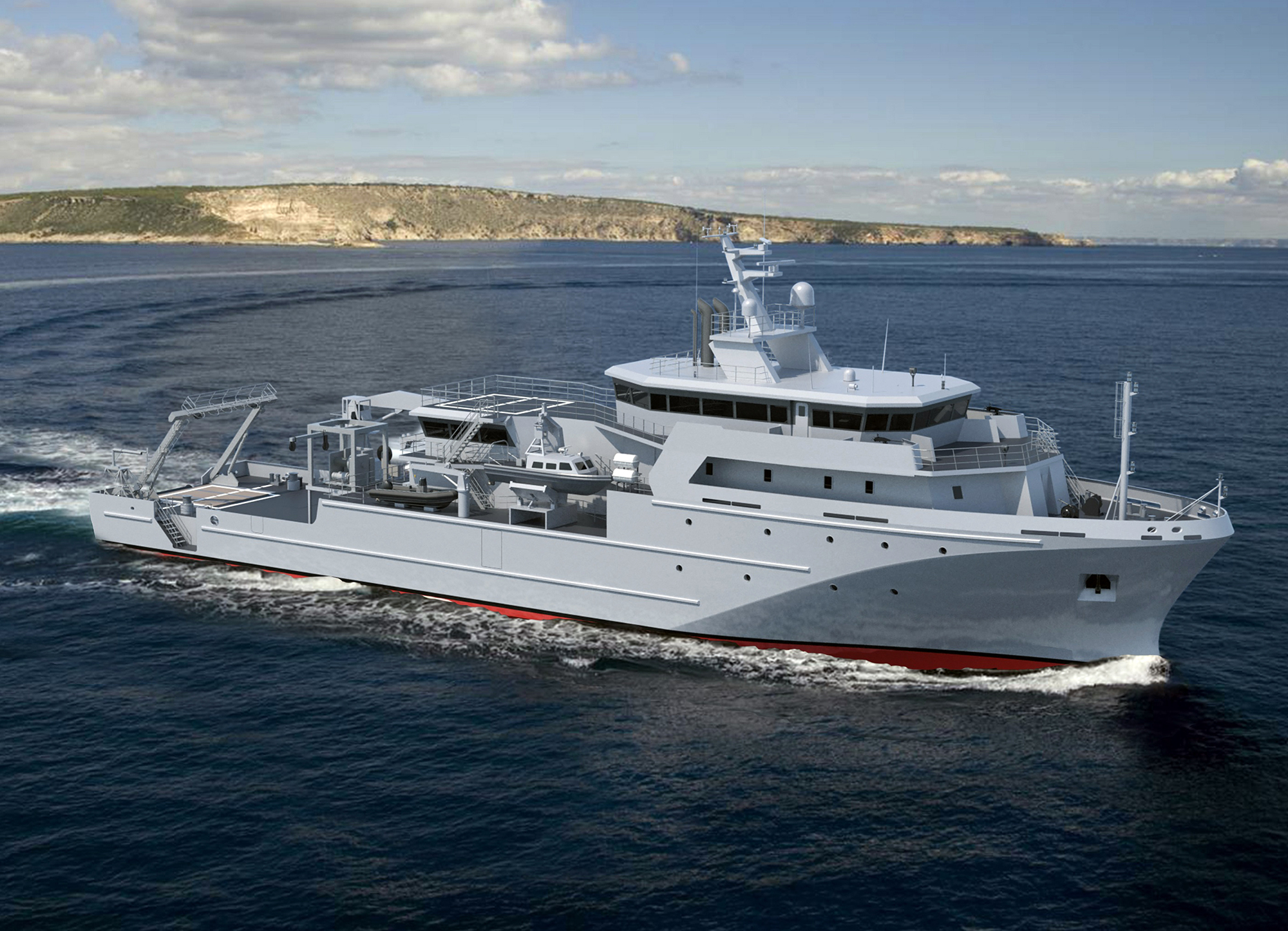 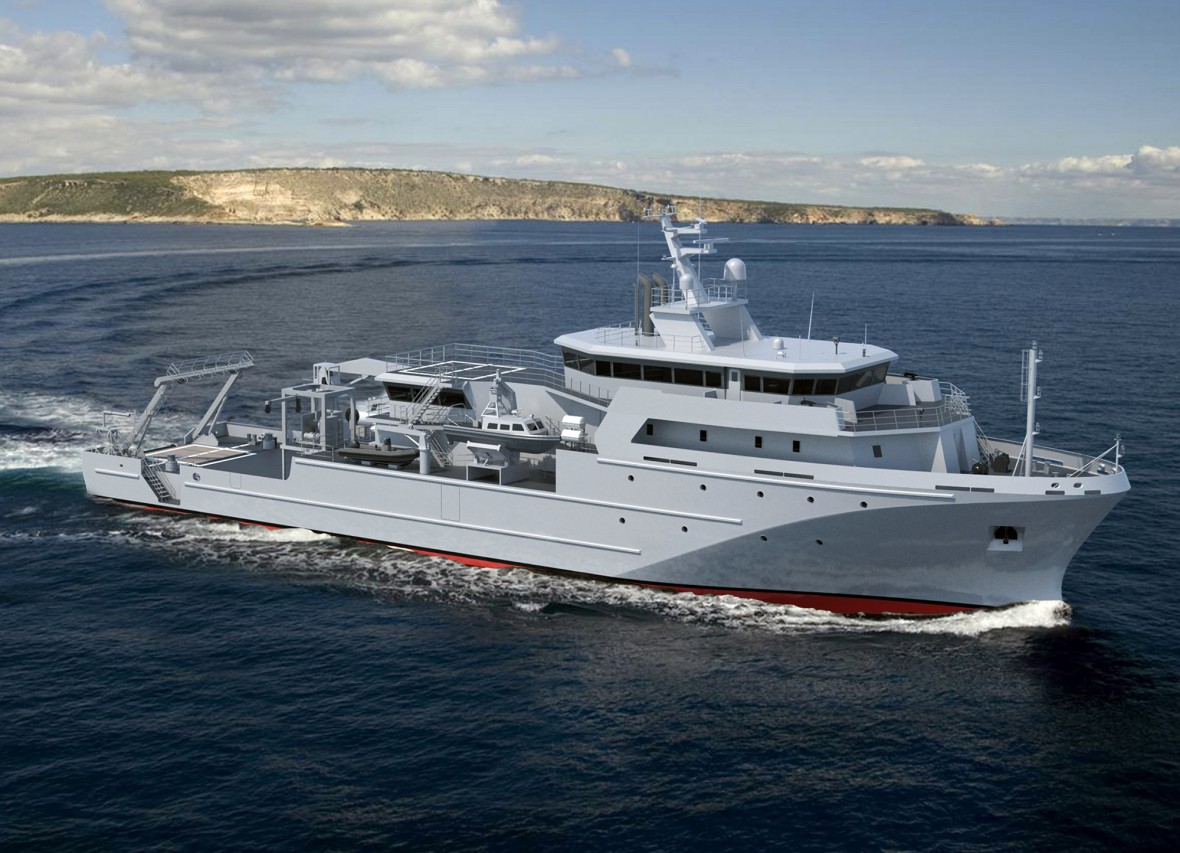 PIRIOU has just recorded a new order from the Moroccan Royal Navy for a 72 m Hydro-Oceanographic Multi-Missions vessel (BHO2M) to be delivered by mid-2018.

This is the third contract awarded by the Moroccan Royal Navy (MRN) after the contract for a 50 m LCT (Landing Craft Tank) to be delivered next July and the contract for the overhaul of the OPV 64 ‘Rais Bargach’ presently under way in Concarneau.

The BHO2M is a last generation scientific vessel equipped with the systems matching the topographic studies answering the International Hydrographic Organization (IHO) standards. She was designed from the Multi-Missions vessel (B2M) under construction in Concarneau for the French Navy.

This contract is the outcome of the significant work of a tight team comprising:

‘We are very pleased and honoured to build this second vessel for the Moroccan Royal Navy. Thanks in particular to a close and crucial collaboration with the SHOM, we have designed a performing vessel with all the qualities required to become the new reference in terms of hydro-oceanographic vessel. Following on from the expedition vessel YERSIN and the Polar Logistic Vessel PLV, PIRIOU thus confirms its ability to design and build very technical vessels with scientific or exploration purposes. Besides we are developing our activities in the Law Enforcement and Defence business and now exporting, both with KERSHIP and the support and partnerships forged with the French Defence and especially the French Navy I sincerely thank’.

The BHO2M is able to fulfil long lasting operations, mainly hydrographic and oceanographic missions such as the completion of topographic studies, data acquisition and process, scientific sampling and the related analyses. She is fitted with an appendix where the acoustic bases of the scientific equipment including the two multibeam echo sounders are located.

As the most performing vessel of her generation as for acoustics, the BHO2M will be able to achieve these missions as well at high speed as in a rough sea.
She will also be able to answer the operational requirements of the authorities regarding patrol, humanitarian assistance, Special Forces or divers deployment, search and rescue and environment protection. 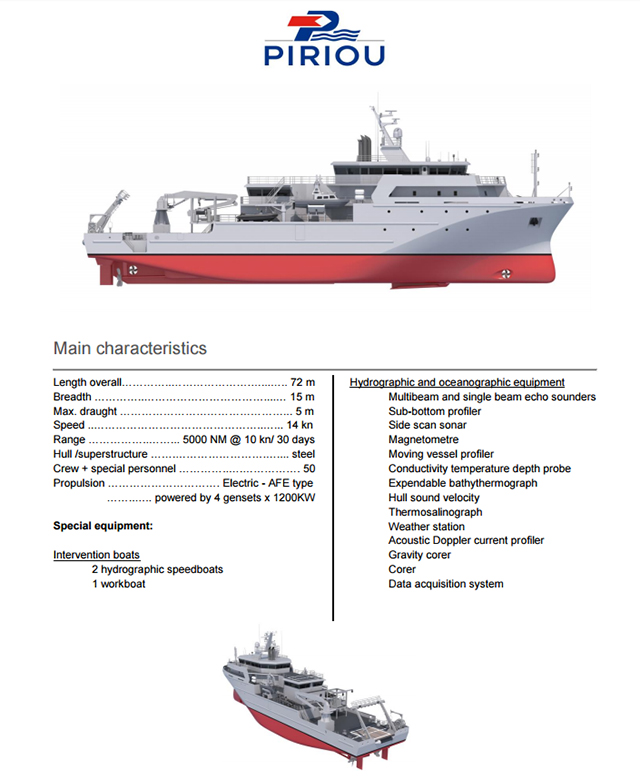 A fruitful collaboration with the Moroccan Royal Navy

Building of multipurpose 50 m LCT barge
In July 2015, the MRN awarded to PIRIOU its first order for the building of a 50 m multipurpose barge which will be delivered in July 2016. The first crew will be trained to operate and maintain the vessel. This training will take place early in July in Concarneau.

Designed by PIRIOU INGENIERIE this 50 metres LCT is based on a proven civilian version which PIRIOU already built in several units. Intended for the transportation of vehicles, various cargos as well as for the supply of water and fuel, the LCT 50 is fitted with two handling cranes and a bow ramp allowing loading or unloading on beach or on dock.

She is specifically designed to produce and to store fresh water thanks to her capability to embark a reverse osmosis system and flexible tanks on deck. 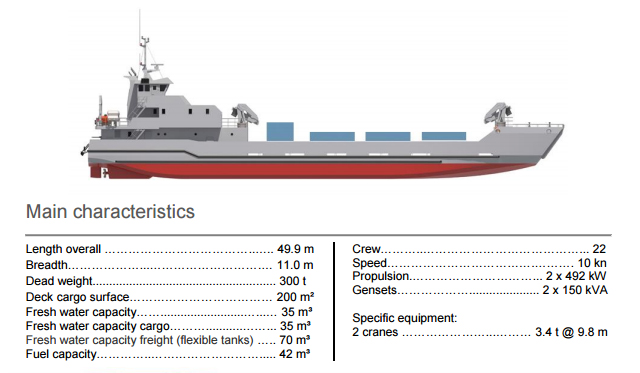 About PIRIOU
Involved in shipbuilding, repair, naval engineering and services since 1965, PIRIOU specializes in producing medium sized vessels up to 120 m in length with high added value through a combination of high-performance engineering and a global network of industrial sites in Europe, Africa and Asia. With more than 420 ships built and delivered worldwide, PIRIOU provides, on a
global scale, bespoke solutions as well as a complete range of standardized or customized vessels that satisfy the requirements of international ship-owners, whether they be private or public, civilian or military. www.piriou.com.