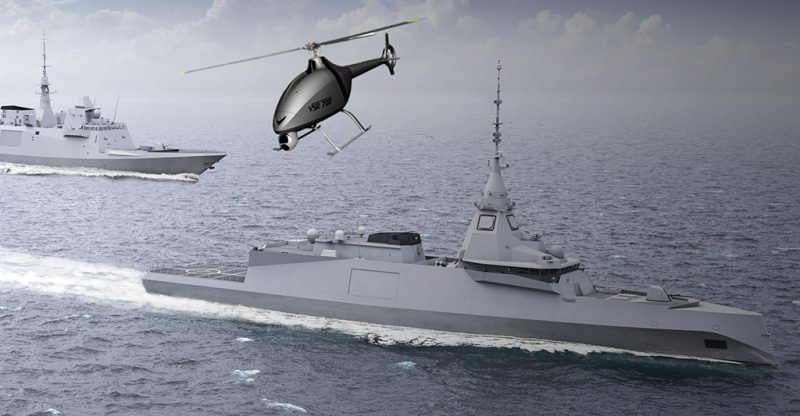 Naval Group will attend the Unmanned Systems Exhibition and Conference (UMEX) in Abu Dhabi on February 25th-27th 2018. This exhibit focuses solely on civilian and military drones and constitutes an opportunity for the European market leader in the Naval Defence sector to showcase the new rotary-wing air-raid drone equipping surface combatants developed through the partnership with Airbus.

On February 25-27th 2018, Naval Group will present its latest innovations in Abu Dhabi at the UMEX (Unmanned Systems Exhibition and Conference). The rotary-wing air-raid drone developed in partnership with Airbus – VSR 700 – will be displayed on Naval Group’s booth along with the demonstration of the deployment of I4Drones® mission system realized in 2017, with the coordinated deployment, in real time, of 3 drones (air, surface and submarine). With strong, scalable and responsive system architectures, Naval Group successfully developed this innovative product specifically designed to adapt to the tactical situation through the exploitation of the data collected by the drones.

Naval Group also demonstrates its technologically advanced know-how regarding the integration of UAVs in different environments, showing its ability to equip surface vessels and submarines with air, surface and submarine drones. This technological progress constitutes a new potential for intelligence, surveillance and reconnaissance missions. Due to the complexity of combat systems and the multiplicity of sensors and interfaces, UAVs integrations require specific expertise based on the technical knowledge of operational issues and the practical experience derived from marine missions.

Jean-Luc Thouvenel, in charge of the Naval Group’s representative office in the United Arab Emirates declared: “Naval Group is pleased to present its offer at this premier event. The drone capacity is an organic component multiplying the potential of the ship in operation; it will become a true asset for naval forces. We are proud of the maturity of our solutions regarding the integration of multi-media vehicles, stemming from our own developments as collaborations with third-party manufacturers. Our know-how is the result of 12 years of R & D and innovation, in partnership with the equipment manufacturers and the service of the French Navy”.

Naval Group started working on naval integration of aerial drones in 2005. The DGA (French Defence Procurement Agency – Direction Générale de l’Armement) commissioned several studies to develop this technology and to reach a high level quality in this sector. UMEX is an opportunity for Naval Group to show the successful results of this long-term commitment.