From 13th to 15th July 2021, Naval Group participates in the first edition of DEFEA, the Athens Defence Exhibition in Greece organised by the Hellenic Ministry of National Defence. Naval Group will showcase its state-of-the-art military ship offer, illustrated by the FDI frigate, the most modern new generation frigate. During this exhibition, Naval Group will also present its skills to provide services to meet its customers’ requirements and to arrange short timeframe innovative strategic partnerships in transfer of technology. Naval Group is the main partner of DEFEA.
Come and meet us at booth E19 at Metropolitan Expo Athens on DEFEA!

Contributing to naval and industrial autonomy in Greece

Naval Group is committed to its customers to provide high performance naval military capacity and to stand by them for the long term. Nava Group supports its partners in developing national security through transfer of technology for the production and maintenance of their defence systems and contributes to their self-reliance and sovereignty. The company has been established in Greece since 2008 and is able to bring its robust track-record in terms of large and successful technology transfers worldwide.

During DEFEA, Naval Group reiterates its commitments to develop strategic partnerships with the Greek Industry and the Hellenic Navy. Naval Group submitted as part of the French Team with MBDA and Thales a comprehensive package designed to ensure Greece has the best capabilities in the shortest timeframe with optimised costs as well as a robust Hellenic Industry Participation plan.

Naval Group is one of the few companies in the world with the ability to deliver directly or in transfers of technology a complete range of warships with their combat systems and all the critical equipment necessary to engage naval power in a theatre of operations.

Naval Group’s booth on DEFEA will reflect this comprehensive offer with a focus on surface ships and innovative solutions.

The FDI frigate is the 5th generation of combat ship for naval supremacy and crisis management. This warship is designed for navies looking for a compact frigate able to perform a large range of missions stand-alone or within a task force either. Like the FREMM, the FDI frigate features high level capabilities in anti-air, antisurface, anti-submarine and asymmetric warfare domains, taking into account French Navy operational legacy acquired in wartime situation. As the first digital frigate, FDI frigate integrates latest-generation systems around a naval digital distributed cloud architecture, natively cyber-secured and compatible with the new Information Technologies developments and evolutions and provides sailors with adapted services. Different versions are available to embrace the specific needs of each navy.

The French Navy will operate five FDI frigates. The first of them is already in production and will be delivered in 2024 and the next two in 2025.

The FDI HN will meet all the requirements of the Hellenic Navy and the first could be in service as soon as early 2025. Naval Group’s offer includes to build 3 of the 4 frigates in Greece.

Gowind® is a military-engineered compact surface combatant equipped with a set of state-ofthe-art, combat-proven anti-submarine, anti-surface and anti-aircraft systems to NATO standards. Gowind® takes the best of the latest technological advances developed and mastered by Naval Group for large frigates, in order to anticipate and meet future operational requirement. 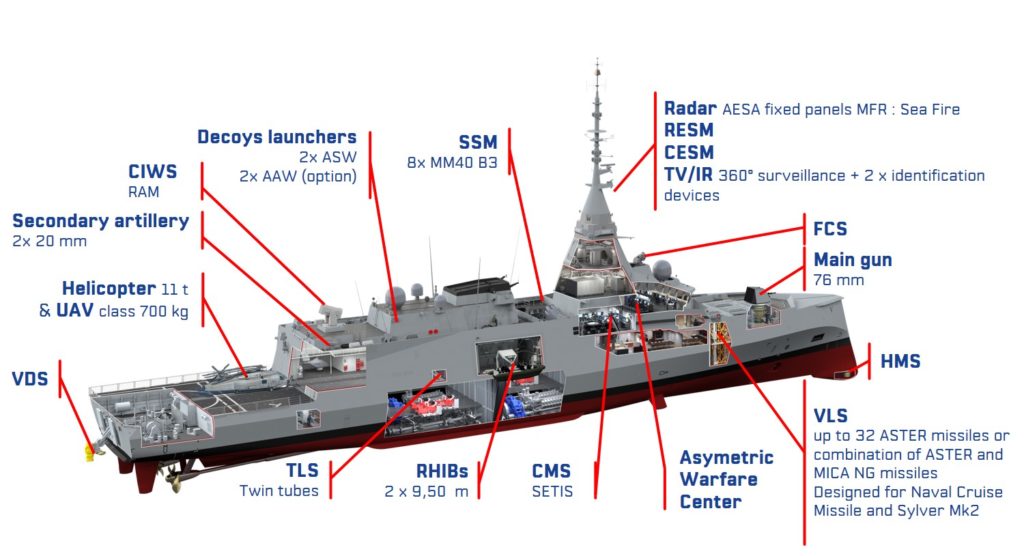 It integrates the latest generation of combat systems developed by Naval Group, SETIS®, the “Panoramic Sensors and Intelligence Module (PSIM)” – a combination of the integrated mast with its various sensors and the Operational Centre and associated technical premises – and the high level of integration, automation and user-friendliness of the Naval Group systems. The Gowind® corvette is already sea proven with the Egyptian navy and after a first of class built in France in only 38 months, the rest of the series is successfully being built in Egypt.

The whole products and services offer of Naval Group will be displayed through Naval XPlore. Thus, delegations will be able to discover the whole Naval Group’s warships offer in virtual operational situations. Naval XPlore is an interactive, immersive and customisable miniature 3D center.

In a closed room in the booth, visitors will face the increasing complexity of the operational environment of a warship, combined with the diversity of threats and the performance of new weapons. Time and priority management is essential to enable them to establish a clear, accurate and up-to-date tactical picture, as well as to properly counter short-term threats.

Thanks to operational feedback and continuous investment in R&D, Naval Group demonstrates through the Naval XPlore experience how the ships of Naval Group and its combat management systems provide intelligent and innovative solutions to meet the needs of the navies.

Delivery and commissioning of the ‘Riachuelo’, the first Brazilian Scorpène submarine entirely made in Brazil

Embraer showcases, for the first time, the C-390 Millennium at the Air Power in Austria