Secretary of Defense Lloyd J. Austin III went to Naval Station Norfolk just last month to visit the aircraft carrier USS Harry S. Truman and to discuss the impact of climate change on security and military readiness. It’s an issue that’s been a priority for him.

The Hampton Roads area in southern Virginia is home to dozens of military installations, including Naval Station Norfolk, the world’s largest naval facility. On the Atlantic Ocean and an important part of the Navy’s ocean-faring capability, it’s a unique example of how the nation’s defense can be affected by the environment.

“Since 2010, the Department of Defense has acknowledged that the planet’s changing climate has a dramatic effect on our missions, plans and installations,” Austin said earlier this year. “The department will immediately take appropriate policy actions to prioritize climate change considerations in our activities and risk assessments [in order] to mitigate this driver of insecurity.” 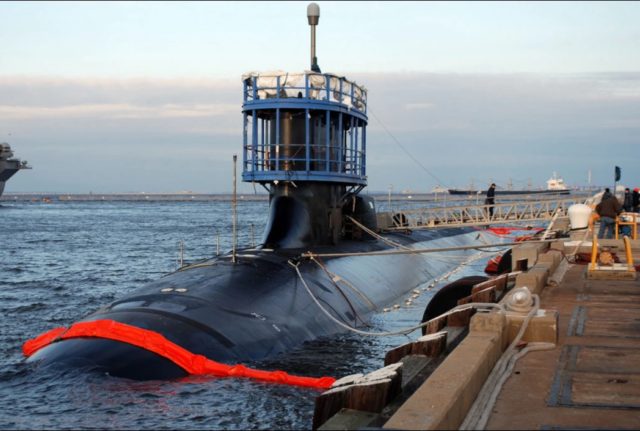 The kind of work the secretary alluded to is already taking place at Navy installations in Hampton Roads according to Rear Adm. Charles Rock, the commander of Navy Region Mid-Atlantic. The command is responsible for, among other things, shore infrastructure at Navy bases in the Hampton Roads area.

“Every installation within Navy Region Mid-Atlantic continuously evaluates the impact of climate and weather effects on our readiness and identifies opportunities to mitigate operational impacts by cooperating with nature, designing and building resilient infrastructure, and reaching out to our community partners to develop holistic responses,” Rock said.

Responses to climate change in the Navy Region Mid-Atlantic region include natural solutions, such as dune restoration or sustaining coastal marshes and vegetation, Rock said. Man-made solutions are used, as well.

Over the last 100 years, average sea level — as measured by a National Oceanic and Atmospheric Agency tide gauge that’s been in place for a century at Naval Station Norfolk — has risen 18 inches. According to NOAA projections, it is expected to rise between 1-3 feet by 2050.

That increase in sea level, coupled with the typical rise and fall of the tide and seasonal weather events common to an oceanside community, poses a risk to the Navy’s ability to conduct and support operations in the Atlantic.

Utilities are also an off-base concern, Ballard said. The Hampton Roads area of Virginia has about two-dozen military facilities. About a quarter of those — including Naval Station Norfolk — are Navy facilities. And most utilities for those facilities come from the civilian community.

“As we work to improve our on-base infrastructure, we have to make sure that there’s no flooding impact to our utility connections or off-base utilities,” he said. 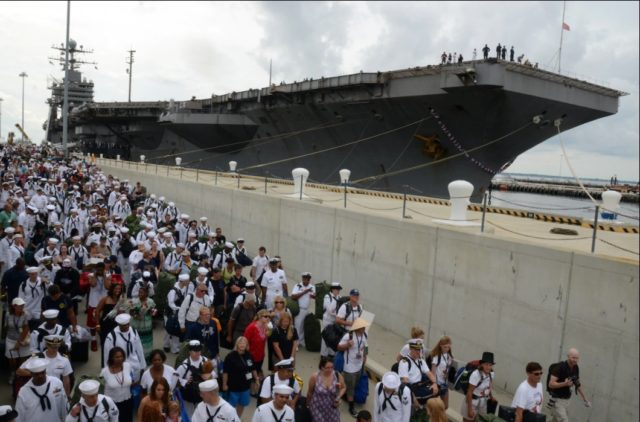 The Hampton Roads area is home to about 1.7 million people, and it’s home to the second largest population of military personnel in the nation. Many military personnel and their families, along with defense civilians and contractor employees who support military operations, live in the civilian community and rely on services there, Ballard said.

“The broader piece from off-base is that our sailors and civilians and families live and work and go to school in the community,” Ballard said. “For the key community facilities — hospitals and schools, for instance — we want to make sure they’re not impacted and that public safety is not impacted by flooding. We’re a part of the community. We want to make sure that those are resilient to the impact of flooding.”

Ballard said the Navy has great local community partners that understand the potential impact of flooding in the area. He said they have been working with the Navy to evaluate which roads and other local infrastructure needs to be improved to increase climate resiliency for both local residents and to support access to the installations.

On base, he said there are also issues that can affect the mission.

“The effects of tidal changes and seasonal events, like hurricanes, are exacerbated by rising sea levels, and that means increased chance of flooding in the areas that support the Atlantic fleet,” Ballard said. “The occasional flooding of roads and dry docks at Norfolk Naval Shipyard, for instance, has prevented work from getting done on ships and submarines there.”

While the 75 or so ships that homeport in the area can be sent out to sea and the more than 130 naval aircraft can be flown away if need be, this brings with it an adverse impact on training and readiness. Flooding also means administrative, maintenance and logistical support operations there could be hampered or come to a stop if facilities are flooded, utilities stop delivering, or roads are flooded and people can’t get to work.

For major events, like a hurricane, Ballard said, the Navy is always prepared. But sea level rise changes things for the Navy’s normal contingency plans.

“It makes the problem worse, because when you have these tidal surges, it could exacerbate the level of flooding just based on the higher sea levels,” he said. “You can’t really do your job if you can’t get to the base through the flooding. And if your building is damaged, it’s hard to do the mission.”

Ballard also said that a changing climate may also lead to an increase in the intensity and frequency of storms, which means additional operational impacts such as increased sortieing of ships and planes away from the installations.

Both on and off its installations in the Hampton Roads area, the Navy is working hard to ensure that no matter what the weather brings, the mission can go on.

“Inside the base, I think one good thing that has occurred recently is that we have updated the unified facilities criteria,” Ballard said. “That’s the building code that the DOD uses when they construct facilities and infrastructure on their bases.”

As part of the UFC, any new construction takes into account climate change and ensures those new facilities are ready for future impacts. Direction from the UFC manifests itself in things like the elevation, design and materials used in the building.

“The UFC has now incorporated standards that address where and how you should build to be more resilient to flooding,” he said. “When we build a new road or when we rebuild the sea walls on the shoreline, or if we rebuild a new pier for the ships or that kind of thing, all of that new construction will incorporate resilience to flooding, which will help us sustain our mission.”

“The master plans basically say how we want to site new facilities on the base, and how we want to evolve our base in the future,” he said. “With this master plan process, it’s another area where we’re incorporating some resiliency. We’re looking at what the projections may be for future flooding, and then we’re trying to build that into the plan so that we’re not siting critical facilities at risk.”

At other Navy installations in the Hampton Roads region, work is being done through the Readiness and Environmental Protection Integration, or REPI, program to preserve lands that protect facilities from flooding and damage.

At Naval Weapons Station Yorktown, which is experiencing the loss of critical shoreline, wetlands and piers due to flooding and erosion, the REPI program will provide funding to restore three acres of coastal land and stabilization of 900 feet of shoreline, in part through the use of artificial oyster reefs.

The Navy and the rest of the U.S. military has a large presence in the Hampton Roads area and ensuring the missions they perform can continue uninhibited by flooding and coastal erosion is a priority for the department.

At Naval Station Norfolk, Ballard thinks efforts to improve resilience to climate impacts are effective and are happening at the right pace.

“We’re not having severe flooding impacts currently in Hampton Roads, so I think we have the time to improve our infrastructure,” he said. “I think the outlook is good for both the Hampton Roads region and the military bases that operate here.” 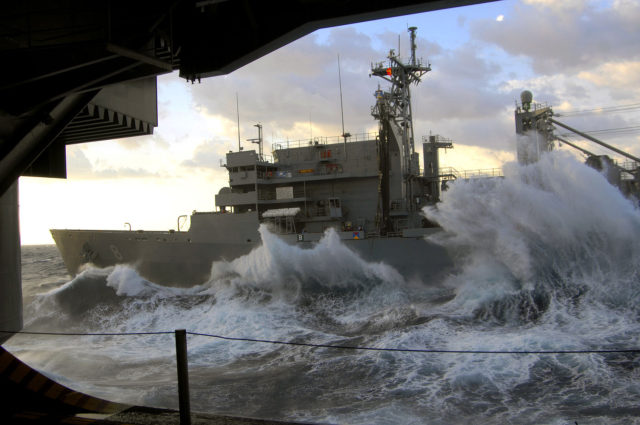 The Navy and Defense Department have efforts underway to mitigate the challenges posed by climate change in one of the most military-dense regions of the country.