HILL AIR FORCE BASE, Utah (AFNS) – Base officials and the Top of Utah community officially welcomed the F-35 Lightning II at a ceremony here Oct. 14, an event that formally marked the beginning of F-35 operations for the 388th and 419th Fighter Wings.

Members of the Utah congressional delegation, Lockheed Martin and the Air Force addressed a crowd of more than 500 people, which included Airmen and their families, local civic leaders and the media. Col. David B. Lyons, the 388th FW commander, said he was blown away with how well Hill’s F-35s have performed during the first month of flying.

“Since September 2, we’ve flown our new jets hard. We’ve flown advanced handling sorties, pushing the jets further than earlier versions,” Lyons said. “We’ve also flown basic surface attack, air-to-air intercepts, opposed surface attack and light suppression of enemy air defenses. The airplanes have met all our expectations in the air, but notably, we have not lost a single flight to a maintenance-related issue thus far. Obviously we can’t stay perfect forever, but if our first month is any indication, this jet is going to be a workhorse.”

A common theme addressed by many of the speakers was the increased threat environment around the world, and the need for air superiority to meet that threat. Gen. Hawk Carlisle, the commander of Air Combat Command, said the security challenges we face today are the greatest we’ve faced in our nation’s history, and that the F-35 is key to keeping America on top of the threat.

“The current state of world affairs represents the most complex and challenging environment our nation has ever faced with respect to national security challenges across the spectrum,” Carlisle said. “The capability over our adversaries is narrowing, and the potential for a near-peer conflict is increasing. Not only will the F-35’s advanced capabilities allow us to operate effectively in the anti-access, aerial denial environment, but the F-35 is a force multiplier. It makes every other airplane in the battlespace that much better because of what it brings to the fight.”

Utah’s senior senator, Sen. Orrin Hatch, said Americans are blessed to live in a nation that protects its cherished freedoms and liberties, and that the F-35 makes those liberties even more secure.

“This weapons system will be a powerful deterrent to those enemies who would tear down our freedom, and destroy our peace,” Hatch said. “In protecting our nation against our foes, we need the F-35 now more than ever.”

“The success of the U.S. armed services has always depended not only on the extraordinary bravery of our men and women in uniform, but also on the superiority of our technology,” Lee said. “In one theater after another we haven’t just out-fought our enemy, we’ve also out-innovated our enemy, and that’s been a key to our success. When it comes to innovating, testing, training, maintaining America’s aircraft, missiles and avionics, northern Utah has long been our nation’s leader.”

Col. Bryan Radliff, the 419th FW commander, noted in his closing remarks that those making history don’t realize it until after the moment has passed.

“We are honored to be a part of history. Today we pause to recognize the sacrifices of our community and our families for your selfless support,” Radliff said. “Our team is strong and steadfast, our past is robust, but it is your resolute support which allows us to pour our hearts and souls into ushering in the next chapter in American aviation exceptionalism — the F-35.”

Earlier this year, the reactivation of the 34th Fighter Squadron marked a historic milestone for the Air Force, as the unit became the first operational Air Force unit to fly combat-coded F-35s. 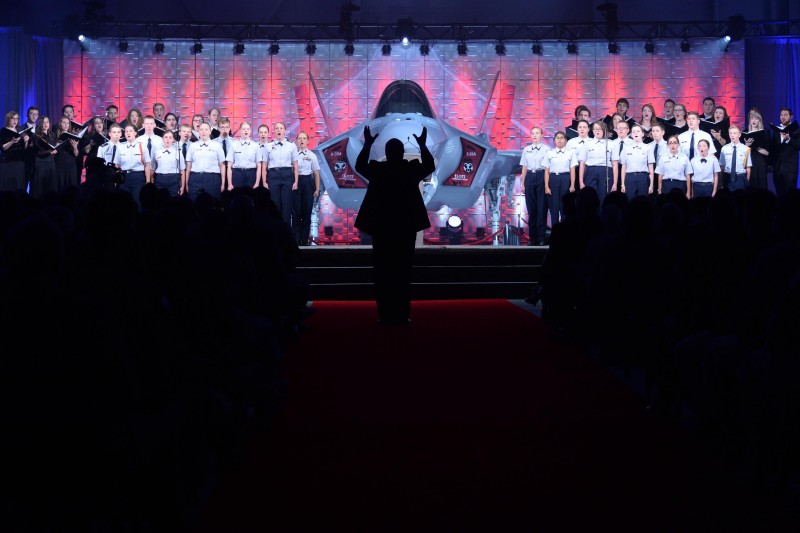