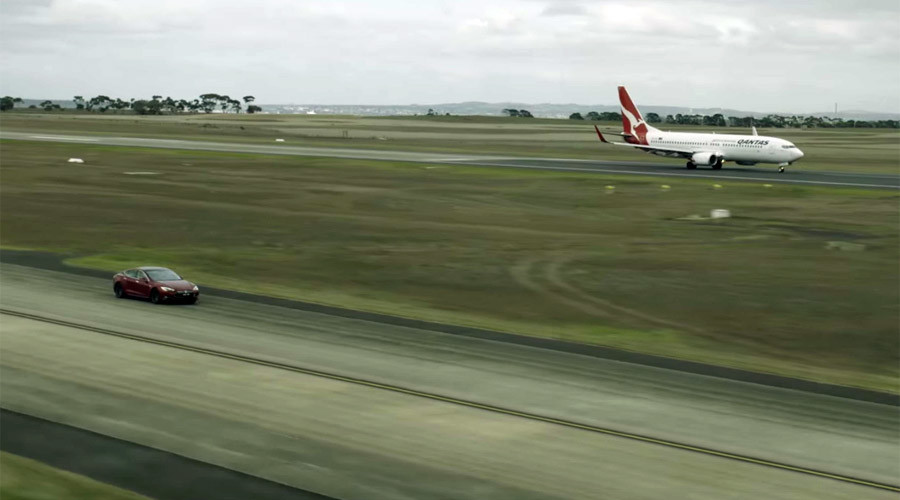 A dramatic race between Tesla’s most powerful electric car and a Boeing aircraft, while being an obvious promotion stunt for Qantas Airlines and Tesla Motors’ push for sustainability, still thrilled speed maniacs but left them wondering: who won?
To mark their partnership Qantas Airlines and Tesla Motors came up with a stunt to promote sustainability and show off their love for speed. Qantas’ Boeing 737 and Tesla electric car Model S P90D raced against each other in an airport in Melbourne, Australia.

By watching the footage it is really hard to say who the winner of the competition was. At one point Tesla takes the lead, but mere seconds later the airliner, well, takes off.

The Boeing 737 is capable of generating speeds of 850 miles per hour (1,367 kilometers), with its takeoff speed being around 150 miles per hour (241 kilometers). Tesla’s Model S can generate speed of 100 km per hour in some three seconds, which should give it an early speed advantage on short distances.

Qantas’ collaboration with Tesla was “a meeting of minds,” said the head of Environment and Fuel, Alan Milne.

“What better way to celebrate working together than having a unique race — car versus plane,” he said.

The two companies are set to continue working on sustainability programs in the transport industry.