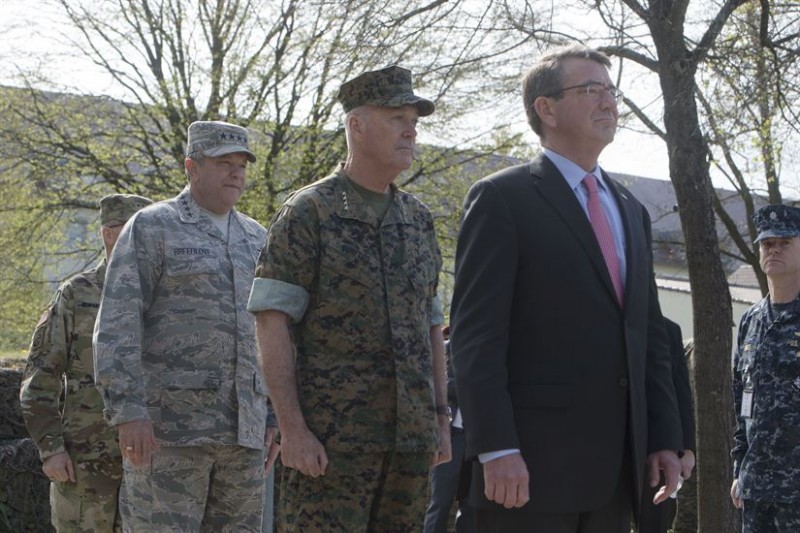 WASHINGTON, May 3, 2016 — Iraq, Syria, and the worldwide fight against the Islamic State of Iraq and the Levant are on the agenda for the second meeting of the defense ministers of countries that are making the most substantial contributions to the counter-ISIL fight, Defense Secretary Ash Carter said yesterday.

The secretary spoke to reporters traveling with him to U.S. European Command headquarters in Stuttgart, Germany, where he attended today’s Eucom change-of-command ceremony, during which Army Gen. Curtis M. Scaparrotti took over command from Air Force Gen. Philip M. Breedlove.

The counter-ISIL meeting also will be in Stuttgart.

The ministers, Carter said, “like us, are determined to deal ISIL a lasting defeat. I met with them in January [and] briefed them on our military campaign plan and the roles and functions that would be needed to accomplish that, [and I] asked them to do more. These folks have done more.”

The secretary said the group will discuss the situations in Syria and Iraq, the ISIL problem worldwide, defense of homelands and other dimensions to make sure everyone is working together on the counter-ISIL fight in Iraq and Syria, and on political and economic aspects as well, which Carter said are necessary for success.

“I’m sure we’ll be meeting again and again … until this is done. And I also last week had the opportunity to meet with the Gulf partners, also important contributors, and talked to them about the same thing, which is doing more, taking advantage of opportunities, capitalizing on momentum and building further momentum,” he added.

The group also will discuss efforts involved in accelerating U.S. counter-ISIL efforts and the participating countries’ corresponding additional efforts In Iraq and Syria in the military, political and economic spheres.

Discussions are going on with NATO about how others can increase their efforts and work together, Carter said, adding that he expects the subject to be discussed at the upcoming NATO defense ministers meeting that he will attend, as well as at the NATO summit that President Barack Obama will attend in Warsaw, Poland, in July.

In response to a question about accelerated U.S. counter-ISIL efforts in Iraq and Syria, Carter said that as the missions in both countries evolve, the roles of troops there evolve.

“We are always looking to build momentum in this,” he added, “so as the campaign progresses [in Iraq] and in Syria, and more opportunities are presented to make different kinds of contributions, we’re going to do that. That’s the whole point.”

Carter said the Defense Department welcomes the fact that local forces in Iraq are moving toward Mosul, even though supply lines will be longer and the logistics burden will be greater than it was in Ramadi and Hit.

“We’re adapting accordingly,” he said. “That kind of thing [will] keep going until we win.”

Extra troops that the department has sent to Syria have been valuable in identifying and enabling local forces of the kind that were successful in important fighting around the Tishrin Dam and the town of Shadadi, the secretary said, “so we want to build on that success.”

Other members of the coalition also are sending in more troops, he added, “[and] they’ve acknowledged — some of them have at least — that they have Special Forces doing exactly the same thing.”

Another reason the department needs more troops in Syria, Carter said, is that he has asked Gulf and European countries to do more there. “And this is our way of providing the liaison and the people who will enable them in turn to make their contributions,” he added.

“All wars develop and learn and build combat power over time, and all wars of consequence, particularly in today’s world, involve an end state in which the people who live there govern themselves in some decent way,” Carter said. “We have to keep that end state in mind, as you always have to do in warfare.”

Saab Delivers its Best and Final Offer for Finland