COPENHAGEN and DENVER – It’s hard to simulate a star, but a new effort between Rovsing A/S and Lockheed Martin will do just that. They are collaborating to bring better solar array simulators to bear in a market of increasing demand for a range of spacecraft sizes. Solar simulation equipment tests power and electrical systems for all spacecraft, so simulating the sun’s power on orbit is critical for satellites under development here on Earth.

Rovsing offerings a versatile, highly modular and efficient testing system for high-power solar arrays, which are used for Earth observation, science or telecom satellites as well as for deep space missions. The Solar Array Simulator (SAS) users already include Orion, ExoMars and MetOp-SG, and more missions are possible with Lockheed Martin behind it.

“Through this technology we can make sure our missions are reliably powered, from nanosatellites to crewed interplanetary missions,” said Brad Holland, Lockheed Martin senior manager for electronic ground support equipment testing. “When landing on Mars, we have to know how much power our vehicles can support in the same way as astronauts rely on solar arrays on the International Space Station. Power means life for the mission and life for our astronauts.”

“Working with Lockheed Martin on this project and understanding their SAS needs compared to the European use models has been a valuable insight which we will built upon for future activities,” said Jesper Troelsen, head of engineering at Rovsing.

“With Lockheed Martin using the RO-5100 SAS Modules now both in the human spaceflight domain for the European Service Module of Orion and in the satellite domain, we are proud to provide Lockheed Martin with the most advanced and user-friendly SAS available in the Western market,” said Hjalti Thorvardarson, CEO of Rovsing.

The Rovsing user interface has many features allowing one to easily define IV curves using the Max Power Point or Rs and N methods. Different simulation modes were used to explore Eclipse and Spin modes. DC tests were performed to verify performance and programmability of the SAS Modules. The Rovsing curve definition SW was used to create several IV curves for the tests. IV curve bias points were verified running under different load conditions comparing the measured values to the ideal values obtained from the Rovsing curve definition SW. Dynamic tests were performed to observe and characterize the output response of the SAS Modules. These tests included Max Power Point Tracking, Output Impedance, and the response to shunt switch regulation (S3R) of the output of the SAS Module to simulate the unit connected to both an unregulated (battery dominated) and a regulated bus.

Headquartered in Bethesda, Maryland, Lockheed Martin is a global security and aerospace company that employs approximately 100,000 people worldwide and is principally engaged in the research, design, development, manufacture, integration and sustainment of advanced technology systems, products and services.

Headquartered in Skovlunde, Denmark, Rovsing is a leading European company providing since 1992 power and functional EGSE for European and US space missions as well as software and independent SW validation & verification (ISVV) services. 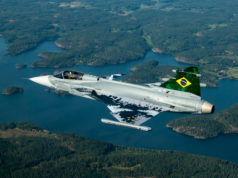