For the crew of a naval ship, understanding what is happening in the area through which their vessel is travelling is crucially important. Better situational awareness helps them counter any threats they might face, which is why warships are equipped with advanced sensors such as radar systems.

But some objects – such as a small uninhabited aerial vehicle or a missile flying just above the surface of the ocean – are difficult to spot from far away, even with sophisticated sensors.

In the future, navies could potentially overcome the challenge of picking out small targets amid the ocean waves by using a special type of sensor known as a single-photon avalanche diode (SPAD). These extremely sensitive sensors work at the level of the individual particle, detecting single photons of light.

“With a normal camera, like your phone’s camera, those sorts of sensors rely on using lots of photons to form an image; in fact, they need millions of photons,” explains Dr Dennis Delic, who leads the design, development and commercialisation of SPADs within Defense.

“With this miniature smart sensor technology we’re operating at the fundamental limit, detecting individual photons and registering each particle. Using advanced processing we can count them and time them, and that opens up all sorts of opportunities in terms of what we can do.” 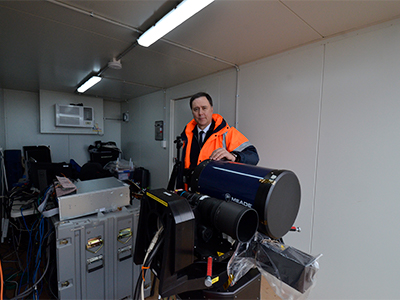 SPADs can be used to build up 3D images in low-light conditions or even when an object of interest is partially obscured. This revolutionary technology has a wide range of potential uses – both military and civilian – from finding objects underwater to tracking objects moving through space.

Another significant advantage of this technology for military operators is that using a SPAD as part of an active sensor system – that is, a system whose energy emissions might be detected by an adversary – would reduce the risk of the user being targeted when they switch it on.

Using a SPAD as the detector in a LiDAR system, which measures distances by illuminating objects with light from a laser and then detecting the reflected energy, would considerably reduce the required power output because of the SPAD’s ability to function at very low photon levels.

The impact of wider adoption of SPADs is expected to be far-reaching, with benefits flowing through to the design of wearable augmented reality vision sensors, autonomous vehicle navigation systems and advanced medical imaging capabilities, among many other possible applications.

Dr Delic has embraced an innovative design approach that reduces the cost of sensor production, paving the way for cost-effective manufacturing at scale.

“Combined with new integrated circuit design techniques, this represents the next revolution in quantum imaging, allowing us to see things that are normally hidden from view,” he says.

Collaboration with partners has been a crucial element of the research effort.

“Through partnering with academia, industry and the Australian Defense Force, the adoption of SPAD sensor technology is the key to enhancing advanced demonstrator programs,” Dr Delic says. “Ultimately, this will help protect Australian military personnel.”

Last year, Dr Delic was named as a finalist for the ANSTO Eureka Prize for Innovative Use of Technology in recognition of his work developing SPADs.