The last of the four Offshore Patrol Vessel 87 (OPV 87) ordered to Naval Group by the Argentinean Navy, the A.R.A. Contraalmirante Cordero, has been launched this Tuesday 21 September in Concarneau

This launch is part of the contract signed by Naval Group with Argentina in 2018 to provide four multi-mission offshore patrol vessels. A.R.A. Bouchard (ex-L’Adroit) had been delivered in December 2019 and A.R.A. Piedrabuena on 13 April 2021. A.R.A. Storni was launched on 10 May 2021 and will be delivered next October, in accordance with the original contractual schedule and despite the global health situation.

The last vessel of the series will offer the same assets and characteristics as the A.R.A. Piedrabuena and Storni. It benefits from an optimised motorised system, an active stabilisation system and a bow thruster. It is also “Ice proven”, i.e. adapted to navigation in the cold waters of Antarctica.

Olivier Michel, Vice-president Sales for Latin America, said: “We are delighted with the excellent cooperation that exists between the Argentinean Navy, Naval Group and Kership on this program. The vessels already delivered are currently in operation on an almost permanent basis and allow the Argentinean Navy to carry out the operations essential to the defence of Argentina’s sovereign interests. We are delighted that this new unit will strengthen this operational capacity. Beyond this project, Naval Group remains fully mobilised to offer its solutions to the Argentinean naval forces.”

Jean-Claude Flandrin, Program Director, added: «Benefiting from the innovations offered by Naval Group and proven by the French Navy, these four latest generation multipurpose vessels have been designed specifically for the needs of the Argentinean Navy to enable crews to carry out their missions in optimal safety conditions. We are proud of the trust that the Argentinean Navy has placed in us and salute the commitment of the Argentinean Navy teams as well as that of the design and production teams, which allow us to ensure the delivery in Concarneau of the A.R.A. Storni and the A.R.A. Contraalmirante Cordero in the coming months, in accordance with the contractual schedule.” 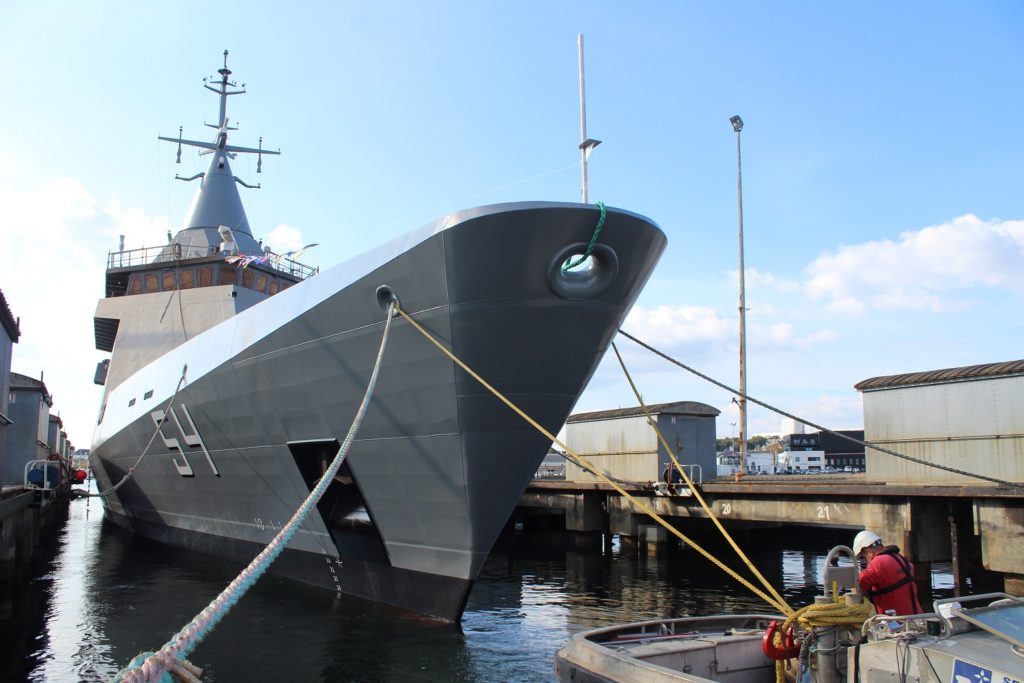 The Argentinean Offshore Patrol Vessels benefit from innovations developed by Naval Group and sea proven by the French Navy, which has operated L’Adroit in several oceans for six years for multiple maritime security operations, either alone or in cooperation with other Navies:

• Very high endurance and excellent sea-worthiness;
• An innovative design inspired by the best techniques used in the naval defence industry;
• A 360° visibility from the bridge and a unique mast for a panoramic radar coverage;
• The discrete and safe implementation in less than five minutes of fast crafts for Special Forces thanks to an ingenious ramp system at the bow of the patroller;

This range of ships also benefits from Naval Group’s expertise in information and command systems, allowing for extensive surveillance of the maritime space and the detection of suspicious behaviours. The A.R.A. Contraalmirante Cordero is equipped with the Polaris system and NiDL tactical data link system, specifically developed by Naval Group for state missions at sea and seaproven by the French Navy.

The Offshore Patrol Vessel is able to stay on deep seas during more than three weeks, to reach a speed of 20 knots and to accommodate a helicopter. Implemented by a reduced crew of 40 members, it is also able to accommodate about twenty extra passengers.
• Length: 87 meters
• Beam: 14 meters
• Displacement: 1,650 tons
• Max. speed: over 20 knots
• Accommodation: 59 (crew and passengers)
• Endurance: > 7,000 nautical miles
• Boarding capacity: two light crafts of 9 meters and one 10-ton class helicopter