The leader of Taiwan, the island thrust into the center of rising tensions between the United States and China, said the threat from Beijing is growing “every day,” as for the first time she confirmed the presence of US military trainers with American troops on Taiwanese soil.

Speaking with CNN in an exclusive interview Tuesday, President Tsai Ing-wen said Taiwan, which is located fewer than 200 kilometers (124 miles) away from China’s southeastern coast, was a “beacon” of democracy that needed to be defended to uphold faith worldwide in democratic values.

“Here is this island of 23 million people trying hard every day to protect ourselves and protect our democracy and making sure that our people have the kind of freedom they deserve,” she said.

“If we fail, then that means people that believe in these values would doubt whether these are values that they (should) be fighting for.”

Taiwan and mainland China have been separately governed since the Nationalists retreated to Taiwan at the end of the Chinese civil war more than 70 years ago.

Taiwan is now a flourishing democracy but the mainland’s ruling Chinese Communist Party (CCP) continues to view the island as an inseparable part of its territory, despite having never controlled it.

Today, relations between Taipei and Beijing are at their lowest point in decades. Earlier this month, China’s military sent a record number of warplanes into the air around Taiwan while diplomats and state-run media warned of a possible invasion unless the island toes the CCP line.

The displays of force are partly the result of strengthening ties between Taiwan and the United States under Presidents Donald Trump and Joe Biden.

In her interview with CNN, Tsai became the first Taiwan President in decades to acknowledge the presence of US troops on the island for training purposes. 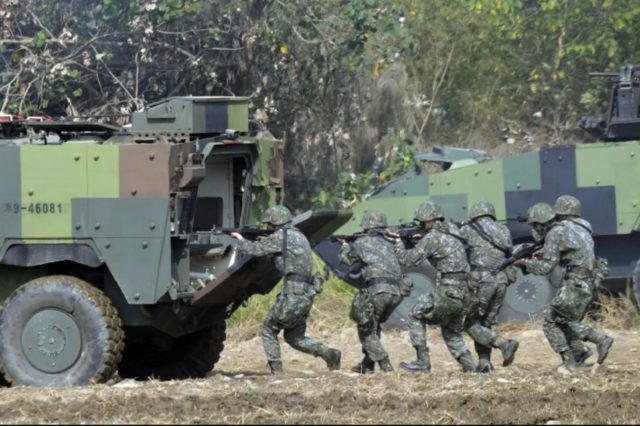 The US military posted and then deleted a video in early 2020 that showed US Army Special Forces training soldiers in Taiwan.

In November 2020, Taiwan’s Defense Ministry announced and then denied to local media that US troops were training local soldiers on the island.

Tsai wouldn’t say exactly how many US military personnel are on the island at present but said it was “not as many as people thought.” “We have a wide range of cooperation with the US aiming at increasing our defense capability,” she said.

A former trade negotiator and law professor, Tsai became Taiwan’s first female president in 2016, a historic win, which came after large student protests on the island against her Nationalist predecessor’s move to form closer ties with mainland China.

When Tsai took CNN for a walk around Taipei earlier this week, hundreds of local citizens waved and called out to her, thanking her for her hard work and asking to pose for selfies.

But Tsai’s presidency has been relentlessly attacked and ridiculed from across the Taiwan Strait — since Tsai took office, relations between Beijing and Taipei have fast deteriorated.

The Chinese government believes Tsai and her party, the Democratic Progressive Party, are in favor of formal Taiwan independence, despite her public statements favoring the status quo — an arrangement by which Taiwan remains self-ruled, without an official declaration.

Economic and diplomatic ties with China, developed over previous governments, have frayed, and the Chinese military has ramped up its pressure on the island.

It was a carefully executed show of force by the Chinese government — straying into areas where it would provoke a response from Taiwan but not entering the island’s airspace.

The maneuvers came after further signs of warming US-Taiwan ties, including a $750 million arms sale announced by Washington in August and a statement by the US-led Quad foreign policy group in favor of supporting the island the same month.

In a major speech on October 8, Chinese President Xi Jinping again pledged “peaceful reunification” between Taiwan and the mainland.

Although he made no mention of an invasion in the speech, Xi has previously refused to rule out military action. A spokesman for China’s Taiwan Affairs Office confirmed Wednesday that Beijing reserved the right to use force to pursue “reunification.”

Although a self-confessed introvert, Tsai is a passionate defender of her island and a fierce advocate for her people.

On Taiwan’s National Day on October 10, in response to growing Chinese military action, President Tsai said Taiwan could not be forced to follow “the path China had laid out for it.”

“There should be absolutely no illusions that the Taiwanese people will bow to pressure,” she said. Speaking to CNN Tuesday, Tsai called on regional democratic partners, including Japan, South Korea and Australia, to help support the island.

“When authoritarian regimes demonstrate expansionist tendencies, democratic countries should come together to stand against them. Taiwan is on the front lines,” she said.

Tsai was re-elected in 2020 with a larger percentage of the vote and as part of her second term, she told CNN she wanted to rapidly modernize Taiwan’s military.

In August, Taiwan announced it would spend $1.4 billion on new fighter jets, likely F-16s. In December 2020, the island’s military began construction on a fleet of eight domestically produced submarines.

Tsai told CNN the government needed to better tailor its military to defend a small island, rather than a conventional fighting force.

“We have a system that is inherited from China, which is a very different country … The way you defend a big piece of land is different from the way you protect a small island, so we have to change the traditional thinking about how a military should be structured,” she said.

However, Tsai added that she was not abandoning the possibility of improved relations with Beijing, saying she would sit down with Chinese leader Xi for talks — if he was willing.

“I (would) encourage him to have more dialogue with the government and people here in Taiwan, and to get a better feel of what it’s like in Taiwan … And, of course, we would do more in terms of understanding the situation in China,” she said.

“We have said again and again that we want to have dialogue with China and this is the best way to avoid misunderstanding, miscalculation and misjudgment in the management of the cross-strait relations,” she added.

Tsai: US would come to our defense

There are no treaties between the US and its regional partners that would guarantee assistance to Taiwan in the event of an attack. But as tensions have risen between Taipei and Beijing, some countries have expressed support for the island.

Japan’s Defense Minister Nobuo Kishi told CNN in an interview in mid-September that “what’s happening in Taiwan is directly linked to Japan,” and Tokyo would respond to any threats to the security of trade routes in the region.

In a town hall hosted by CNN on Thursday, US President Biden was firm on the question of whether the US would defend Taiwan in the event of a Chinese invasion.

“Yes, we have a commitment to do that,” he said.

The White House subsequently played down his comments and, speaking to CNN, Tsai said people have “different interpretations” of what the US President meant.

However, Tsai said she believed if Taiwan came under attack from mainland China, the US and other regional democracies would come to its aid, “given the long-term relationship we have with the US.”

“Taiwan is not alone because we are a democracy, we respect freedom and we are peace lovers.

And we share values with most of the countries in the region and geographically we are of strategic importance,” she said, pointing to the island’s leading role in the global semiconductor supply chain and adding regional powers had a “common interest” in keeping the island safe.

When asked if Taiwan could defend itself without military assistance, Tsai said the island would defend itself “as long as we can…But let me reiterate, it’s important that we have the support of our friends, and also like-minded countries,” she said.

Defending Taiwan doesn’t just involve military might. As part of the growing US support for Taiwan, Washington has started pushing for greater participation by Taipei in international governing bodies, especially the United Nations.

US Secretary of State Antony Blinken said on his official Twitter Monday that Taiwan was a “critical partner and a democratic success story” and called for it to have a greater role at the UN.

Beijing, which took Taipei’s seat at the UN in 1971, has since been successful in largely squeezing the island off of the international stage.

Tsai said it has long been the policy of all sides of Taiwan’s politics for the island to take a greater role at the UN.

She said she wasn’t concerned about aggravating Beijing. “We have expressed our hope that we want to be part of the UN system. And China has their story to tell. And it’s for the international community to judge,” she said.

Tsai’s time in office has coincided with the rise of a more assertive Beijing, with Xi now considered the most powerful Chinese leader in decades.

During his second term in power since 2017, Xi has begun to change how China positions itself globally. Under Xi, the country’s military has grown larger and more advanced, with China’s naval fleet overtaking that of the US in terms of size. 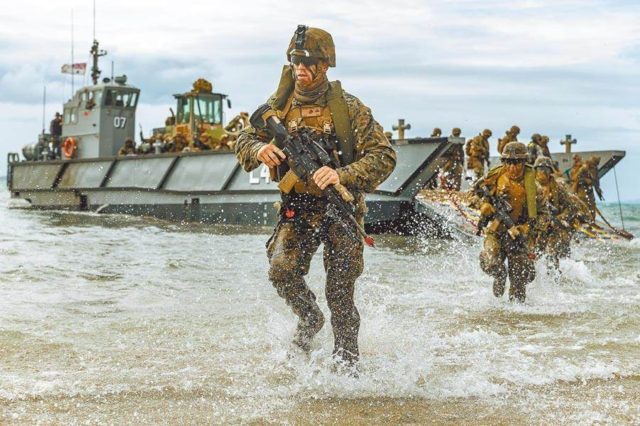 At the same time, Xi’s foreign policy goals have led to the promotion of fiercely nationalistic diplomats, known as “wolf warriors,” inside the Foreign Ministry, who are willing to vocally defend China’s positions of highly controversial and sensitive issues with Taiwan often being called the reddest of Beijing’s “red lines.”

However, Tsai said she believed the two governments could still live together in peace despite the differences in their political systems.

“If we can sit down and talk about our differences and try to make arrangements so we can coexist peacefully? I think that is the expectation of our people here, and the people in China, as well as the people in the region,” she said. 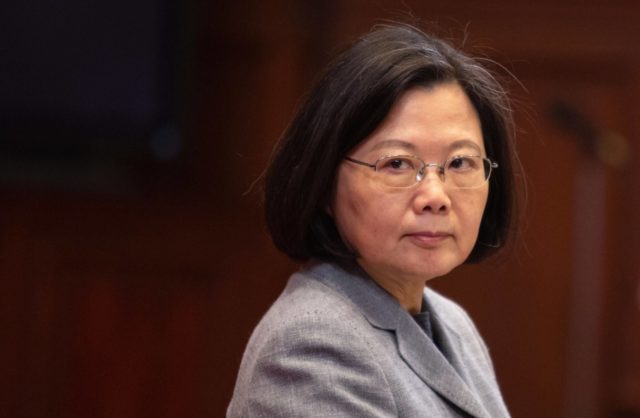 Tsai said the time was approaching for the Chinese Communist Party to decide what sort of relationship it wanted to have with the region and with the rest of the world.

“Does Xi want to have a peaceful relationship with everybody in the region or in the world, or does he want to be a in a dominant position so that everybody listens to him, listens to China?” she said.

Tsai hasn’t given up hope for democracy in China though, despite moves towards greater authoritarian control under Xi.

“Democracy sometimes is chaotic. It’s messy, confrontational, but at the end, you find the best way to govern, the best way to establish a social order so that people can live together peacefully,” she said.

By law, Tsai can only serve two terms but, with just two-and-a-half years left in office before she steps down in January 2024, she still has a lot to get done.

Her priorities include connecting Taiwan to the world and shoring up its community against attempts by other governments to divide it.

Tsai said she hopes that she is remembered as a leader who left her people more “united.”

“I hope they will remember me as someone who made the utmost effort to protect this place, to make this place more secure and more resilient,” she said.