Finmeccanica-AgustaWestland announced today that it has completed the UK Ministry of Defence’s Rotary Wing Unmanned Aerial System (RWUAS) Capability Concept Demonstration (CCD) contract it was awarded in 2013, including 27 hours of demonstration flying and 22 automatic simulated deck landings using its SW-4 RUAS Solo technology demonstrator.
The flying element of the contract was carried out at Llanbedr Airfield in late May 2015 and included demonstrating the operability of a RWUAS, pseudo deck landings and various mission capabilities. 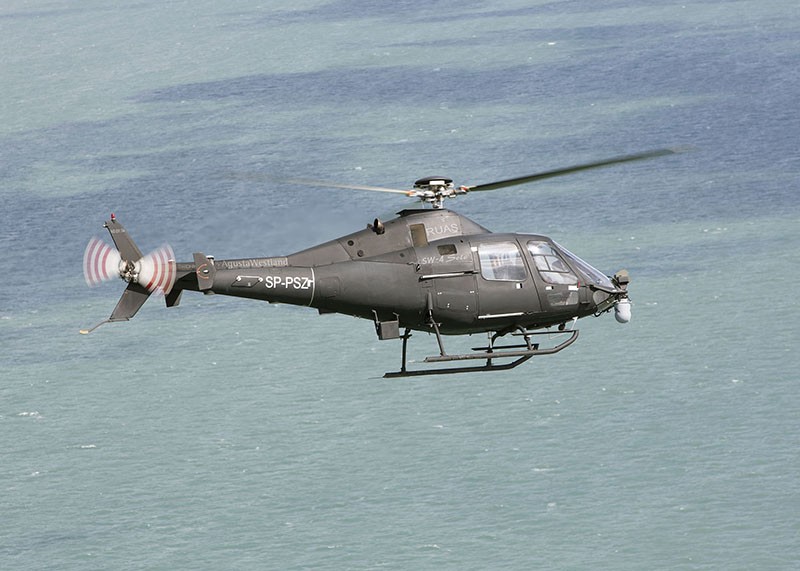 The Royal Navy’s Commander Maritime Capability (Aviation), Cdr Bow Wheaton, said “We are very pleased with the outcome of the Rotary Wing UAS demonstration project and have learnt a lot that will inform future options. Rotary Wing UAS offer a niche combination of endurance and payload, whilst being able to launch and recover from relatively small warships with a flight deck.”
Under the capability study element of the RWUAS CCD a range of rotorcraft size options have been investigated that could deliver persistent maritime capability. The project also investigated the concept of a rotorcraft system that could provide mine hunting, hydrographic survey and airborne surveillance capability with the ability to operate from a frigate size ship.

The SW-4 Solo RUAS/OPH, based on the proven PZL-Swidnik SW-4 light single-engine helicopter, has been designed for both unmanned and piloted operations, providing users with maximum operational flexibility. It has been developed as a result of close cooperation between AgustaWestland and its subsidiary, PZL-Swidnik in Poland. The RUAS version of the SW-4 is capable of performing a number of roles, including intelligence, surveillance and reconnaissance, as well as cargo re-supply. In piloted configuration, the SW-4 can undertake a number of activities, including transportation of personnel, surveillance and intervention. It can be fitted with a comprehensive mission equipment package including search and communications/intelligence systems.

In 2014 Finmeccanica – AgustaWestland completed a demonstration of its Rotorcraft Unmanned Aerial System / Optionally Piloted Helicopter (RUAS/OPH) to the Italian Ministry of Defence. The trials were conducted to evaluate unmanned rotorcraft technology and its potential to provide enhanced capabilities for the Italian armed forces in the future. Recently the SW-4 Solo performed successfully during the European Defense Agency ‘Italian Blade’ Exercise, demonstrating its ISTAR mission, manned-unmanned teaming and data dissemination capabilities.
The successful completion of these demonstrations highlights the expertise Finmeccanica–AgustaWestland has in the specialist area of unmanned rotorcraft, which have the potential to provide enhanced operational capabilities across a broad spectrum of missions.