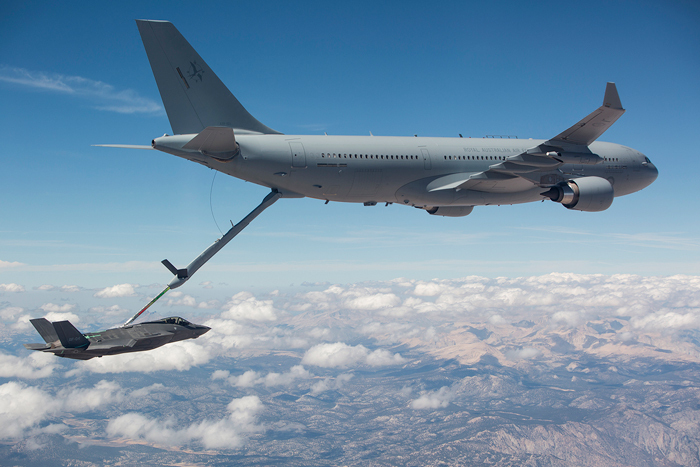 An Airbus A330 Multi Role Tanker Transport (A330 MRTT) of the Royal Australian Air Force has successfully refuelled a F-35A Joint Strike Fighter of the US Air Force. During a four-hour sortie from Edwards AFB, California, the tanker, known in RAAF service as the KC-30A, conducted 59 contacts including five “wet contacts” during which 19,600kg (43,200lb) of fuel were passed. All the refuelling was performed used the A330 MRTT’s Airbus Airborne Refuelling Boom System (ARBS). The combat-proven A330 MRTT is the only new generation tanker/transport certified and in-service and the first to refuel the F-35, underlining its full international interoperability with all Western front-line fighters.

Share
Facebook
Twitter
WhatsApp
Linkedin
Previous articleARABSAT 6B (BADR-7) satellite leaves Airbus Defence and Space
Next articlePutin has embarrassed us all in Syria. Welcome to the age of Russian power
- Advertisement -