Camcopter S-100 assisted in the rescue of over 8.800 refugees in the Mediterranean

Austria / Malta, 2. October 2015 – In five months of operation, the NGO Migrant Offshore Aid Station (MOAS) saved over 8.800 lives in the Mediterranean. By spotting and monitoring distressed vessels, Schiebel’s Unmanned Air System CAMCOPTER® S-100 assisted in the rescue and contributed significantly to the success of the mission.

Thousands of refugees have tragically drowned while crossing the world’s deadliest border. Already back in 2014, MOAS and Schiebel rescued more than 2.800 men, women and children.
This year in May the NGO´s Phoenix, a 40-meter long ship, on which the CAMCOPTER® S-100 is stationed, set sail again until the end of September 2015. Under the guidance and coordination
of Rome’s Maritime Rescue Coordination Centre it was possible to save over 11.600 lives since the start of the operation in 2014.

The S-100 proved to be a huge asset during the operation as it can locate refugee boats by day and night, even in rough sea conditions and at long distance. The camera of the unmanned
helicopter delivers daylight and infrared video in real time to the MOAS team. Due to the high quality of the footage, it is not only possible to locate a small ship even at miles away but also to identify whether it is a fishing boat or a ship in danger.

Operated by Schiebel staff and largely sponsored by Schiebel, the unmanned helicopter serves to considerably extend the reach of the vessel beyond horizon to increase the area of influence.
“Schiebel has been supportive from the very beginning in 2014, helping MOAS to become the first civilian organization to use these high-tech helicopters for a great humanitarian purpose.

Besides giving us a subsidized rate from the start, Schiebel has generously offered completely free use for the CAMCOPTER® S-100 in part of 2015,” said Martin Xuereb, the MOAS director.
MOAS has significantly reduced the death toll. Even after the end of this year’s Mediterranean mission, the NGO will continue to monitor the situation closely and plans to resume its operation
next year. Schiebel has provided support since the start of the project and would be happy to join forces again to prevent deaths at sea whenever possible. 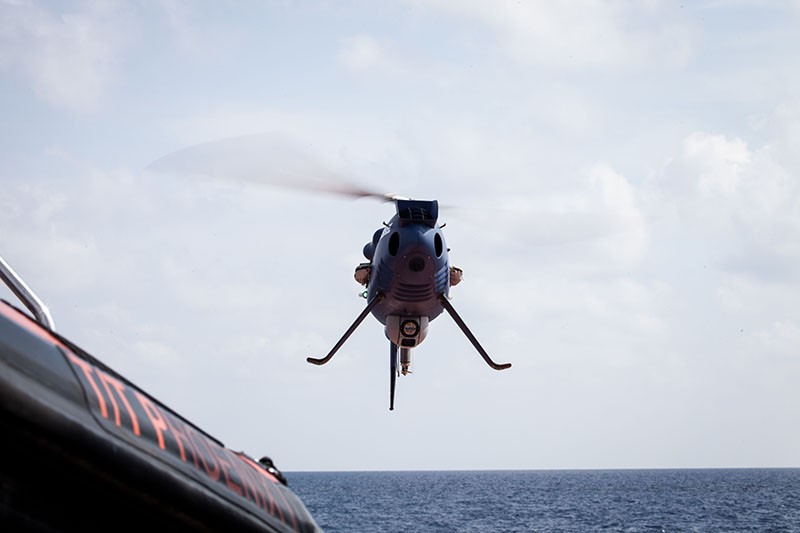 About Schiebel:
Founded in 1951, the Vienna-based Schiebel Group focuses on the development, testing and production of state-of-the-art mine detection equipment and the revolutionary CAMCOPTER© S-100 Unmanned Air System (UAS). Schiebel has built an international reputation for producing quality defense and humanitarian products, which are backed by exceptional after-sales service and support. In 2010, Schiebel’s new composite division has started to supply high-tech customers with products of supreme carbon fiber technology – all quality-controlled to meet ISO 9001 standards. With headquarters in Vienna (Austria), Schiebel now maintains production facilities in Wiener Neustadt (Austria) and Abu Dhabi (UAE), as well as offices in Washington DC (USA) and Phnom Penh (Cambodia).

About Migrant Offshore Aid Station (MOAS):
MOAS is a group of international humanitarians, security professionals, medical staff and experienced maritime operators who have combined their resources to help prevent further tragedies at sea. They are passionate about the plight of those seeking a better life and facing dangerous challenges as they try to find a life free from violence. MOAS, which is based in Malta, was founded by Christopher and Regina Catrambone and has a Board of Advisors made up of distinguished personalities from various sections of society.

About the CAMCOPTER® S-100:
Schiebel’s CAMCOPTER® S-100 Unmanned Air System (UAS) is a proven capability for military and civilian applications. The Vertical Takeoff and Landing (VTOL) UAS needs no prepared area or supporting launch or recovery equipment. It operates by day and at night, under adverse weather conditions, with a beyond line-of-sight capability out to 200 km, both on land and at sea. The S-100 navigates via preprogrammed GPS waypoints or is operated with a pilot control unit. Missions are planned and controlled via a simple point-and-click graphical user interface. High-definition payload imagery is transmitted to the control station in real time. Using “fly-by-wire” technology controlled by a triple-redundant flight computer, the UAV can complete its mission automatically. Its carbon fiber and titanium fuselage provides capacity for a wide range of payload / endurance combinations up to a service ceiling of 18000 ft. In its standard configuration, the CAMCOPTER® S-100 carries a 75 lbs / 34 kg payload up to 10 hours and is powered with AVGas or heavy fuel.

Share
Facebook
Twitter
WhatsApp
Linkedin
Previous articlePutin has embarrassed us all in Syria. Welcome to the age of Russian power
Next articleF-16V Fighting Falcon Comes to Indonesia
- Advertisement -