Israel Shipyards launched a new OPV for the Cyprus Navy

Abu Dhabi, 22 February 2021 – Tawazun and MBDA have signed a head of terms agreement with the intent...
Read more

MBDA has been awarded a contract from the Egyptian Navy for the VL MICA NG (New Generation) air defence...
Read more

Minister for the Armed Forces Florence Parly on Friday 19 February announced the launch of the full-scale development...
Read more 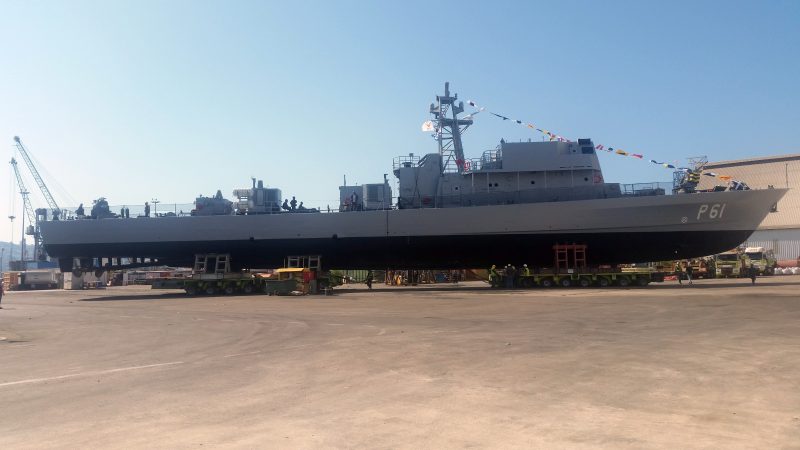 In a project valued at tens of millions of Euros, the OPV carrying high-end systems will be delivered to the Cypriot Navy towards the end of 2017, to be used for Exclusive Economic Zone (EEZ) protection

The OPV was unveiled and launched at a ceremony held last week at Israel Shipyards’ facility at Haifa Bay in Israel – in the presence of senior members of the Cypriot Ministry of Defence, representatives of SIBAT (Israel MOD), and the management and employees of the company. The OPV was ordered in December 2015 and will be delivered to Cyprus towards the end of the year, to be used to protect the Exclusive Economic Zone (EEZ) of Cyprus. The project is valued at tens of millions of Euros.

According to Avi Shahaf, CEO of Israel Shipyards, “The project is of great importance for the company, and we invested our knowledge, experience and ingenuity in order to build and to supply this unique technologically advanced ship. We would like to express our deepest gratitude to the Cyprus Ministry of Defence for the trust they invested in Israel Shipyards in order to deliver this vessel.”

The new OPV has a displacement of 430 tons, an overall length of 62 meters, a maximum speed of 32 knots, and carries up to 30 crewmembers plus a Special Forces unit. Installed on the vessel are multiple sophisticated systems including 2 Rafael Typhoon Weapon Stations, advanced radar, electro-optical payloads, communications systems including satellite communications, navigation systems, command and control systems, and more.

Based on the battle-proven SAAR 4 and SAAR 4.5, Israel Shipyards’ OPV is available in a 62 or 58-meter length. Among the wide range of missions supported by the OPV are open sea patrolling and surveillance operations, as well as those related to seaborne terrorism, smuggling and illegal activity interdiction. The OPV is also ideal for offshore facilities protection, support of special operations forces, Search and Rescue operations, fishing control, and anti-pollution missions. The OPV can accommodate a variety of advanced weapon configurations including a remotely controlled naval gun, 2 x 0.5″ / 7.62 mm stabilized gun mounts, a Command and Control system, and Search Radar. It can also support the most advanced day and night vision systems, ARPA Navigation Radar, ECDIS, and, optionally, medium-range missiles. The OPV is certified by Lloyd’s and complies with international regulations regarding stability, hull construction, navigation systems, etc.

Israel Shipyards Ltd. is one of the largest privately owned shipbuilding and repair facilities in the Eastern Mediterranean. The manufacturing and repair plant is spread over 330,000 sq. meters with 45,000 sq. meters of under-roof facilities and a wharf length of 900 meters. Israel Shipyards operates a floating dock with 4,500 tons of lifting capacity and has a total berthing area length of 1000 meters with 12 meters of water depth.

The company’s main offerings cover SAAR class missile corvettes including SAAR 4, SAAR 4.5 and SAAR S-72, Offshore Patrol Vessels (OPVs), fast patrol craft including SHALDAG MK II – MK V, commercial ships, tugboats, and multipurpose boats. Over the past decades, the company has built and delivered a large number of these vessels, which are in active service in the Israeli Navy as well as in the navies, coast guards, and law enforcement authorities of countries around the world.

Israel Shipyards employs about 500 people, including more than 35 engineers in the design department. Its management is comprised of highly experienced and skilled professionals with extensive naval and technical backgrounds.

Abu Dhabi, 22 February 2021 – Tawazun and MBDA have signed a head of terms agreement with the intent...
Read more
Aerospace Industry