The third Scorpene-class submarine constructed by Mazagon Dock Shipbuilders Limited for the Indian Navy was launched today, 31 January 2018 by Mrs Reena Lanba, President Navy Wives Welfare Association after the recitation of Sanskrit shlokas from the Atharva Veda and traditional ceremonies associated with the launch of naval platforms. She also named this submarine as ‘Karanj’ and wished her good fortune.

This historic event reaffirms the giant strides taken by Mazagon Dock Shipbuilders Ltd (MDL) in the ongoing ‘Make In India’ programme, which is being actively implemented by the Department of Defence Production (MoD).

The submarine was then towed to Mumbai Port Trust, for separation from the pontoon. Karanj will now undergo rigorous trials and tests, both in harbour and at sea before it is commissioned into the Navy.

The contract for the construction and Transfer-of-Technology for six Scorpene submarines in series, has M/s Naval Group (formerly DCNS) of France as ‘Collaborator’ and are being built by MDL.

During his address, Admiral Sunil Lanba, CNS, said that the launch of Karanj marked a significant departure from the manning and training philosophy that was adopted for the first two submarines and added that from third submarine onwards the Navy would be fully self-reliant in training and certification processes. He also mentioned that the old Karanj had served the nation for 34 years from 1969 to 2003 including participation in 1971 war. 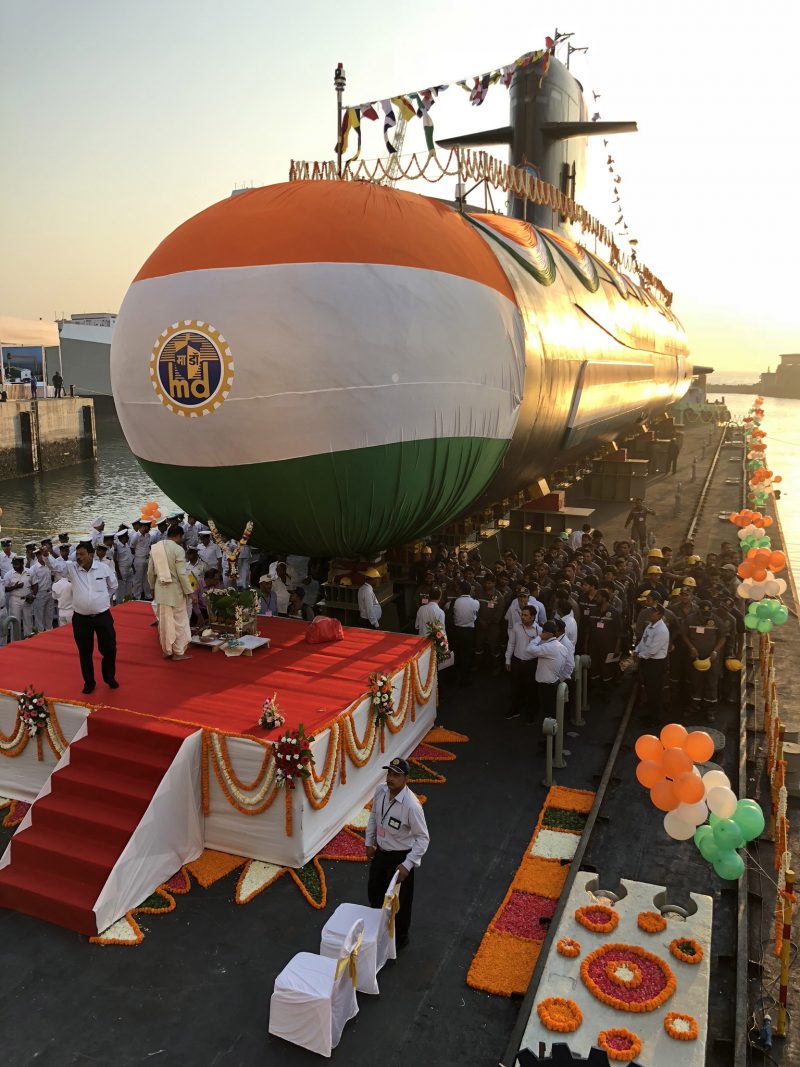 The state-of- the-art technology utilised for construction of the Scorpene class submarines has ensured superior stealth features such as advanced acoustic silencing techniques, low radiated noise levels, hydro-dynamically optimized shape and the ability to launch a crippling attack on the enemy using precision guided weapons. The attack can be launched with both torpedoes and tube launched anti-ship missiles, whilst underwater or on surface.

The stealth of this potent platform is enhanced by the special attention given to various signatures. These stealth features give it an invulnerability, unmatched by most submarines.

Scorpene submarines can undertake multifarious types of missions i.e Anti-Surface warfare, Anti-Submarine warfare, intelligence gathering, mine laying, area surveillance etc. The submarine is designed to operate in all theatres, with means provided to ensure interoperability with other components of a Naval Task Force. It is a potent platform, marking a generational shift in submarine operations.

Last year, on 14 December 2017, INS Kalvari, the first Scorpene class submarine was commissioned into the Indian Navy, by Hon’ble Prime Minister. Khanderi, the second Scorpene class submarine, was launched in January 2017, and is currently undergoing the rigorous phase of sea trials and is also scheduled to be delivered shortly.