Military efforts to defeat the Islamic State of Iraq and Syria are about six to eight months ahead of where officials thought they would be at this point, Army Gen. Joseph L. Votel, commander of U.S. Central Command, said. The success throughout the campaign has been quite extraordinary, he added.

With major urban battles complete, the follow-up, especially in Iraq, has been rapid and has moved much faster anticipated, Votel said, and now the effort is focused on cleaning up remaining ISIS forces and stabilizing the region.

“As we got ready to go into Mosul 18 months ago, we tried to make sure that our military planning was very closely aligned to our development of stabilization planning and the humanitarian aspects that have gone along with that, as well as with the political planning that had to take place,” the general said.

With the assistance of the coalition and with a lot of hard work by the Iraqis, Votel said, an Iraqi army that in 2014 was running away from ISIS is now one that by last fall was conducting major large unit operations of division and corps level.

The Iraqi security forces very quickly consolidated their success with a variety of other operations, the Centcom commander said, some with coalition support and many of them without coalition support to complete the liberation from ISIS that Iraq’s prime minister announced in December.

Since then, he said, the Iraqis have continued to conduct a variety of additional operations – some with coalition support and some without — to consolidate their gains and get after ISIS’ remaining underlying the presence.

“I think it’s important to recognize in both of these areas that while in Iraq where we’ve liberated the terrain, [ISIS is] no longer governing, no longer exerting taxes, no longer performing governmental functions like they have in the past.” Votel said. “But there still is a presence, and so the Iraqi security forces are very much focused on that.”

The Iraqis also have begun to transition from major combat operations to what to what they need to do now, Votel said, which is more wide-area security operations. This will require them to develop a variety of military skills that will allow them to address the insurgent or guerilla-type tactics that they would expect to see from ISIS at this stage, he added.

The general said the United States and the coalition are working closely with the Iraqi forces to help them recover and get back to normal.

“I do expect we will continue to see our alliance on the [Counter Terrorism Service] as one of their principal fighting elements,” Votel said. “They’ve been very strong since the beginning, and we’ll continue to see that as the Iraqi security forces step up to the plate and begin to take on more of those tasks in the future.”

Development of Iraqi border forces will be a heavy focus, the general noted, because ISIS operates without regard to borders, boundaries or any recognized norm.

“Along the way, we’ll see the coalition forces with the United States continue to provide the support that the government of Iraq asks of them,” Votel said. “This has been something we’ve been talking about with them for some time here, so that we do remain in a position where we can continue to help them professionalize, continue to help them develop into the security forces that the Iraqi people need and want to protect them in the future.”

The military aspect was the easy part, the general said. The aftermath and the stabilization are much more challenging in the long run, he added.

Though ISIS still has a presence, Votel said, Iraq is in a pretty good place now in terms of security.

The situation in Syria is different, the general said, because more factors are present there. Russia, the Bashar Assad regime, Iran, Turkey, the United States and coalition forces are all involved there, Votel said, so it’s a much more complex situation.

More than 90 percent of the caliphate ISIS claimed in Syria, particularly in the north and eastern portions of the country, have been liberated, the general said. But ISIS is still present, and U.S. and coalition forces will have to continue to operate on, he said.

As the threat of ISIS has diminished, many underlying challenges are coming to the forefront, Votel said.

“We are going to have to continue to look at the ways we keep pressure on ISIS and continue to develop mechanisms on the ground that help de-escalate the situations that continue to arise so they can be addressed through discussion and diplomacy, as opposed to fighting,” he said.

Hard work remains, the Centcom commander said, such as stabilizing areas, consolidating gains, getting people back into their homes, addressing the long-term issues of reconstruction.

Votel emphasized the importance of the “By, With and Through” approach that the United States and the coalition have taken, not just militarily, but in different ways. 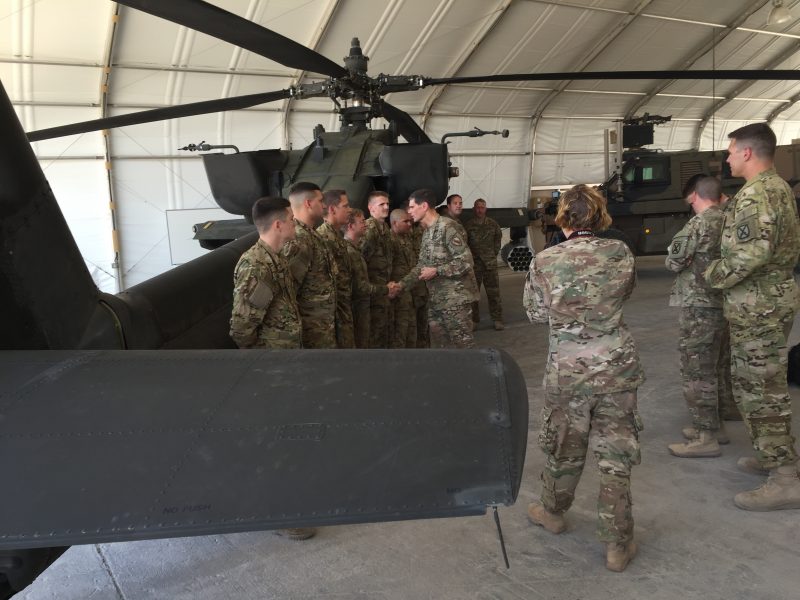 This represents a different approach from how it’s been done in Iraq and across the region in the past, Votel said. It puts the onus on partners to develop local solutions to largely local problems, and that puts the onus on them to own the results, he explained.

The general said he sees the approach happening across the region, and that the new approach is well-received. “We did not try to do the fighting for them,” he said. “We tried to enable them, we tried to advise them and give them the benefit of our experience. I think that largely paid off, and I think as we look across the region now, we look to kind of the approach that we’re putting in place in Afghanistan. I think this is reflective of that.

“We certainly are drawing on all of our great capabilities, our ability to bring superior air power into this — our linkage with development and diplomacy here is a key aspect of this, of course — but I think as I look across the region this is kind of the way we will operate in the future,” Votel continued. “I think it allows us to accomplish our objectives, but yet it also allows our partners on the ground to accomplish theirs as well. So I think this ‘By, With and Through’ is a big lesson.”