FORT WORTH, Texas, Sept. 28, 2018 /PRNewswire/ – The U.S. Department of Defense and Lockheed Martin (NYSE: LMT) have finalized an $11.5 billion contract for the production and delivery of 141 F-35 aircraft at the lowest per aircraft price in program history.

For the eleventh consecutive year, the cost of an F-35A was lowered. The F-35A unit price including aircraft, engine and fee, is $89.2 million. This represents a 5.4 percent reduction from the $94.3 million it cost for an F-35A in Low-Rate Initial Production Lot 10 (LRIP 10).

“Driving down cost is critical to the success of this program,” said Vice Admiral Mat Winter, F-35 Program Executive Officer. “We are delivering on our commitment to get the best price for taxpayers and warfighters. 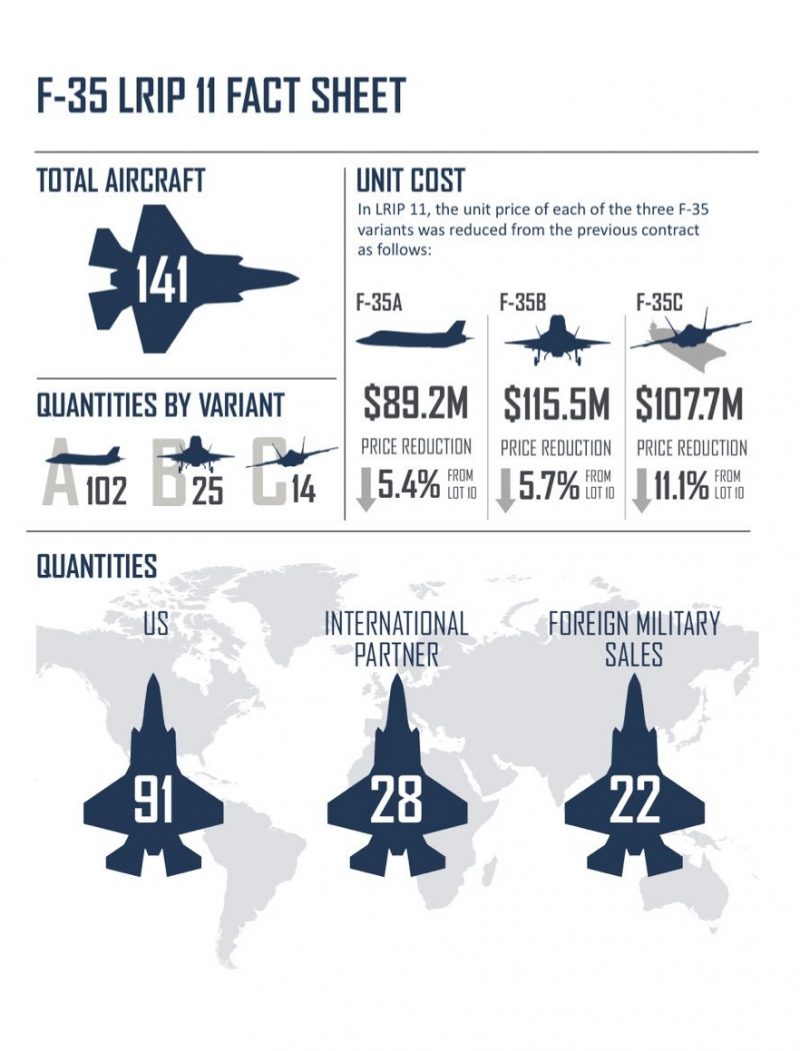 “This agreement for the next lot of F-35s represents a fair deal for the U.S. Government, our international partnership and industry. We remain focused on aggressively reducing F-35 cost and delivering best value.”

With stealth technology, supersonic speed, powerful sensors, large weapons capacity and global deployment, the F-35 is the most advanced fighter aircraft ever built, enabling women and men in uniform to execute their mission and return home safely. More than a fighter jet, the F-35’s ability to collect, analyze and share data, is a powerful force multiplier that enhances all airborne, surface and ground-based assets in the battlespace.

“This agreement marks a significant step forward for the F-35 program as we continue to increase production, reduce costs and deliver transformational capabilities to our men and women in uniform,” said Greg Ulmer, F-35 Vice President and General Manager. “As production ramps up, and we implement additional cost savings initiatives, we are on track to reduce the cost of the F-35A to $80 million by 2020, which is equal to or less than legacy aircraft, while providing a major leap in capability.”

The latest contract is a demonstration of the program’s progress and maturity, as industry and the government now set their sights on future acquisition approaches for the next three production lots to further reduce costs.

With more than 320 aircraft operating from 15 bases around the globe – the F-35 is playing a critical role in today’s global security environment. More than 680 pilots and 6,200 maintainers have been trained and the F-35 fleet has surpassed more than 155,000 cumulative flight hours. The F-35 weapons system reliability continues to improve through a combination of hardware and software improvements.

In addition to advanced capability, the F-35 provides economic stability to the U.S. and Allied nations by creating jobs, commerce and security, and contributing to the global trade balance. The F-35 is built by thousands of men and women in America and around the world. With more than 1,500 suppliers in 46 states and Puerto Rico, the F-35 program supports more than 194,000 direct and indirect jobs in the U.S. alone. The program also includes more than 100 international suppliers, creating or sustaining thousands of international jobs.

Headquartered in Bethesda, Maryland, Lockheed Martin is a global security and aerospace company that employs approximately 100,000 people worldwide and is principally engaged in the research, design, development, manufacture, integration and sustainment of advanced technology systems, products and services. This year the company received three Edison Awards for ground-breaking innovations in autonomy, satellite technology and directed energy.