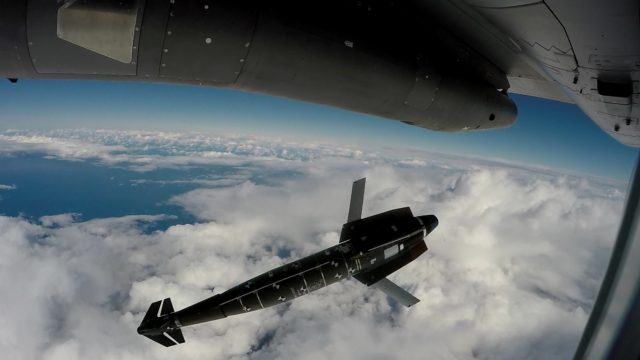 The separation dynamics observed during the two firings were in line with simulations. These industrial validation tests were designed to check the correct sequencing of all components of the wing hardpoint and the weapon, as well as the wing deployment mechanism on the range extension kit. Following these successful separation tests, the first live firing tests will be conducted in 2021 as part of the final development and qualification of the 1,000-kg AASM.

The 1,000-kg AASM features a guidance kit derived from the 250-kg version and a specific range extension kit. The 1,000-kg AASM has the same modular characteristics as the 250-kg version with the BLU109 penetrating bomb body and MK84 conventional body, as well as its close functional integration with the Rafale, especially for the fire control system and configuration options.

This new weapon will give the Rafale an enhanced strike capability, with payload configurations of up to three 1,000-kg AASMs per aircraft. Its standoff range is also extended, thanks to the integrated propulsion system.

Developed and produced by Safran Electronics & Defense based on existing bombs from 250 kg to 1,000 kg, the AASM Hammer family is the air-to-ground weapon of choice for the Rafale. The 1,000-kg version rounds out the AASM range. Qualification is planned for 2022, leading to service entry on the new Rafale F4 standard.

Safran is an international high-technology group operating in the aviation (aircraft propulsion, equipment and interiors), space and defense markets. Its core purpose is to contribute to a safer, more sustainable world, where air transport is more environmentally friendly, comfortable and accessible. Safran has a global presence, with 81,000 employees and holds, alone or in partnership, world or regional leadership positions in its core markets. Safran is listed on the Euronext Paris stock exchange and is part of the CAC 40 and Euro Stoxx 50 indices.

Safran Electronics & Defense is a world leader in the supply of solutions and services in optronics, avionics, electronics and critical software for both civil and military markets. The company equips more than 1,000 ships, 25,000 land vehicles and 10,000 aircraft worldwide.
For more information: www.safran-group.com and www.safran-electronics-defense.com Follow @Safran and @SafranElecDef on Twitter