The event aims to accelerate the Chinese military‘s intelligentization development, enhancing its joint and all-field combat capability based on a system of network and information and boosting its integrated development of mechanization, informatization and intelligentization, the institute told the Global Times at the event.

Developed by Beijing North Vehicle Group Corporation under the state-owned China North Industries Group Corporation, the Pathbreaker unmanned ground vehicle weighs 1.2 tons, runs at a top speed of 30 kilometers an hour with caterpillar tracks, and is equipped with an armed reconnaissance system which allows it to conduct reconnaissance, fire assault, patrol, search and destroy operations, as well as strike guidance in complicated terrain at high mobility.

It can be remotely controlled, or automatically follow combat personnel and independently avoid obstacles, an employee at the booth told the Global Times, noting that more advanced types of land robots similar to the Pathbreaker are being developed and will hopefully join the Chinese military service in the future. 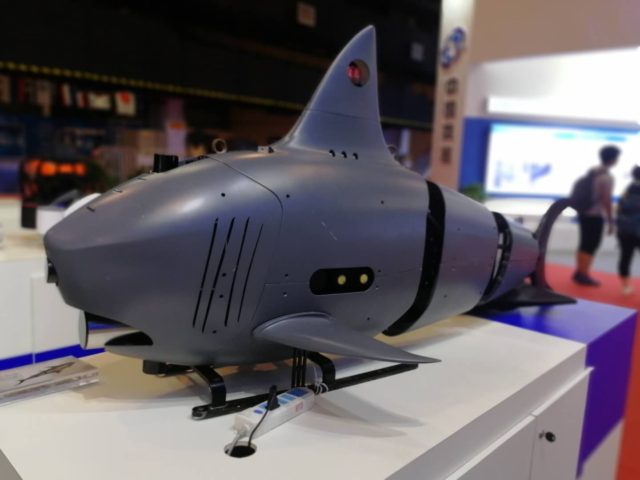 The marine drone, dubbed Robo-Shark, looks unsettlingly like the real thing when it’s wending its way through the water. True, it doesn’t have the bite of the infamous great white that terrorized Amity Island in the Steven Spielberg blockbuster. But it boasts tech potential for inflicting pain in other ways. According to the Chinese Communist Party’s Global Times that first reported on the craft, it was built to conduct “underwater close-in reconnaissance, search and rescue, battlefield surveillance, anti-submarine, hydrological survey, communications relay and underwater tracking missions.”

With a sinister-sounding CV like that, it may as well take hunks out of people while it’s at it.

The craft is outfitted with a bionic tail section that can whip it up to maximum speeds of 10 knots. That form of locomotion, meanwhile, also reduces battery drain compared to conventional underwater motors for longer missions. According to the robosea.org site of Beijing-based manufacturer Boya Gongdao Robot Technology, the robotic shark is 2.2 meters long and is equipped with an “all-around obstacle avoidance” system. It also contains “considerable space inside” to load new tech to add or adapt its capacities to mission specifications.

None of the limited company information or details in media reports indicate the Robo-Shark is or has been deployed as an armed assault weapon. Yet China is usually pretty coy about crowing its military tech accomplishments, only letting the world know once they’re old news.

Beijing Aerospace Zhongfei Technology brought different drones to the expo, including target drones that are not only used in training exercises but also in real combat as decoys, and vertical takeoff and landing drones for reconnaissance and patrol missions.

Digital systems used to command and control the combat units were also on display.