Twenty years after being removed from power in a U.S.-led invasion, Taliban militiamen swept to into Afghanistan’s capital, Kabul, on Sunday, facing little resistance from Afghan government forces.

Within hours, Afghanistan’s Washington-backed president had left the country and the flag at the U.S. Embassy had been lowered amid a hasty evacuation of diplomatic personnel.

Ashraf Ghani, Afghanistan’s president, said on Facebook that his was “a hard choice,” but that he decided to leave to prevent bloodshed. He signed off his post with “Long Live Afghanistan.” The Taliban released a statement saying they had entered the capital of 6 million people and were working to restore law and order.

On Saturday, the militia’s fighters took the last remaining government stronghold of Mazar-e-Sharif, followed quickly on Sunday by the city of Jalalabad, which lies just east of Kabul on a major road artery.

By Sunday, Kabul was a scene eerily reminiscent of the fall of Saigon in 1975 in the wake of the Vietnam War, as helicopters circled the U.S. embassy as its diplomatic personnel were under evacuation orders. The comparison to Vietnam was one that U.S. Secretary of State Antony Blinken was keen to dismiss: “This is not Saigon. We went to Afghanistan 20 years ago with one mission, and that mission was to deal with the folks who attacked us on 9/11 and we succeeded in that mission,” he told CNN’s State of the Union.

In an alert on Sunday, the U.S. embassy cautioned of reports that Kabul’s airport was “taking fire” and that “we are instructing U.S. citizens to shelter in place.” A U.S. military official told NPR the airport was closed to commercial aircraft as military evacuations continue.

Earlier, the White House had ordered about 5,000 troops to be sent to Afghanistan to provide security and assist in evacuations of U.S. personnel. The Pentagon confirmed on Sunday another 1,000 would head there as well. 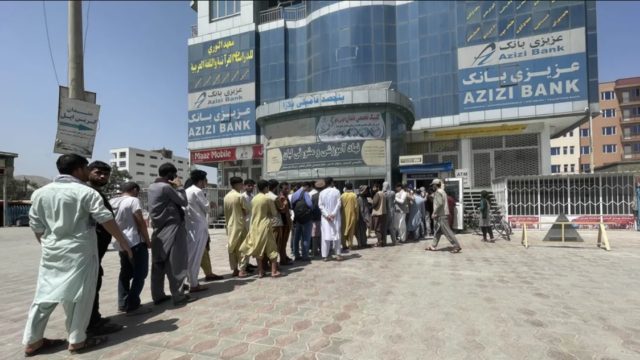 Many Afghans waited in long lines at banks to withdraw money, concerned about what might happen to their savings under a new regime.

One resident, who NPR is not identifying to protect from possible reprisals, described chaos in the capital.

“Right now, the thieves, robbers, all the looters are out and trying to loot cars — whichever are traveling right now,” the woman said. “[There are] gunshots everywhere.”

She added: “In [our neighborhood] we have this guard with a gun and he also just shot at someone because people are trying to loot houses and whomever is passing by the road.”

Still others in the capital appeared to welcome their new rulers.

Matthieu Aikins, a freelance journalist in Kabul, tweeted late Sunday that he’d just returned from the western part of the capital, “where this evening there were extraordinary scenes of Taliban fighters leaving the capital in captured Humvees and police trucks, brandishing M16s, cheered on by crowds of bystanders, chased by packs of children.”

In a series of tweets, former Afghan President Hamid Karzai says he, along with Abdullah Abdullah, who represented the Afghan government in earlier negotiations with the Taliban, and head of the Hezb-i-Islami party and former warlord Gulbuddin Hekmatyar, were forming a “coordinating council” to “prevent chaos and reduce the suffering of the people and to better manage the affairs related to peace.”

But with the Taliban holding virtually all the cards, it wasn’t clear what, if anything, such a council or an interim government could do.