Taliban retakes Afghanistan and put the Kabul airport in Chaos

The Taliban has declared the war in Afghanistan over after its fighters swept into the capital, Kabul, and President Ashraf Ghani fled the country.

Victorious Taliban fighters patrolled the streets of Kabul on Monday as thousands of Afghans mobbed the city’s airport trying to flee the group’s feared hardline brand of rule.

Meanwhile, many nations were scrambling to evacuate their diplomats, citizens and some local Afghan staff.

Al Jazeera’s Charlotte Bellis, reporting from Kabul, says “the airport has been the real crisis point of the roll-in of the Taliban”.

“Outside of that it has been relatively smooth. Security forces have for the most part laid down their weapons,” she says.

It is chaos at Kabul airport. Planes are taking off and landing and people are running across the runway. pic.twitter.com/kKrg667AQB

Mohammad Naeem, a spokesman for Taliban’s political office tells Al Jazeera the group does not want to live in isolation and says the type and form of the new government in Afghanistan will be made clear soon. He also calls for peaceful international relations.

The United Nations Security Council will discuss the situation in Afghanistan later on Monday.

Shah Mehmood Qureshi, Pakistan’s foreign minister, is meeting with a delegation of Afghan political leaders who arrived on Sunday in the Pakistani capital Islamabad.

“The Foreign Minister underlined that the region could not afford continued instability in Afghanistan which would impact negatively the objective of a peaceful and connected region,” says a Pakistani foreign ministry statement.

“He added that international community’s continued engagement in the efforts for durable peace and stability in Afghanistan would be important as it was a shared responsibility.”

The Taliban’s takeover of Afghanistan is a “failure of the international community”, Britain’s Defence Secretary Ben Wallace says, assessing that the West’s intervention was a job only half-done.

“All of us know that Afghanistan is not finished. It’s an unfinished problem for the world and the world needs to help it,” he tells BBC television.

DISCLAIMER: DISTURBING FOOTAGE❗️❗️❗️
Two people who tied themselves to the wheels of an aircraft flying from Kabul, tragically fall down. pic.twitter.com/Gr3qwGLrFn

China says it is willing to develop “friendly relations” with the Taliban after the armed group seize control of Afghanistan.

“China respects the right of the Afghan people to independently determine their own destiny and is willing to continue to develop … friendly and cooperative relations with Afghanistan,” foreign ministry spokeswoman Hua Chunying tells reporters.

The European Union is working with member states to find quick solutions for the relocation of local Afghan staff and their families to a safe place, a spokesperson says.

“The matter is extremely urgent, we take it very seriously and continue to work hard, together with EU member states, on implementing rapid solutions for them and ensure their safety,” the spokesperson for the bloc’s executive Commission tells Reuters news agency.

The Commission does not give figures for their local Afghan staff for security reasons.

One witness says he has seen the bodies of five people being taken to a vehicle. Another witness says it is not clear whether the victims have been killed by gunshots or in a stampede.

US troops, who are in charge of the airport, earlier fired in the air to scatter the crowd, a US official says. 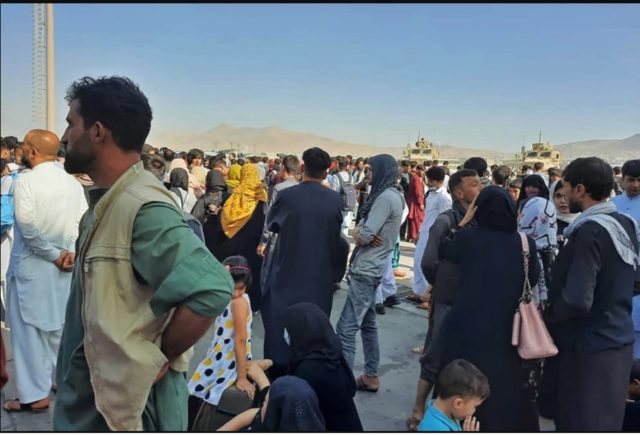 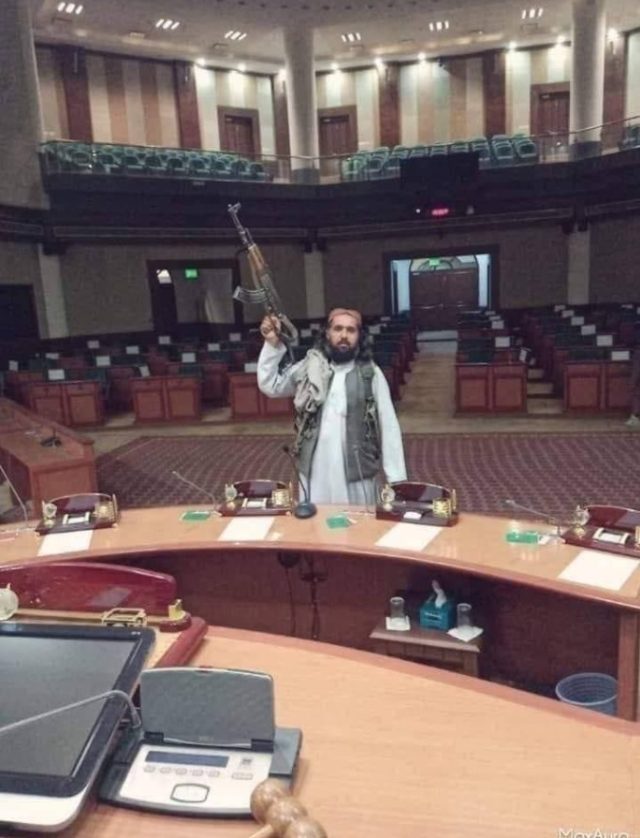