The cooperation agreement, will enable the two companies to offer advanced UAVs solutions, based on IAI’s Tactical Heron, in Romania.

Based on the agreement the UAV systems will be manufactured in Brasov, Romania. Furthermore, IAI will establish in Romania an academy to train the system operators and technicians for the UAV systems.

The Tactical Heron is a UAV designed for tactical battlefield missions, and mainly serves land forces. The UAV can carry out multiple missions with various payloads and includes the most advanced technologies IAI has to offer. 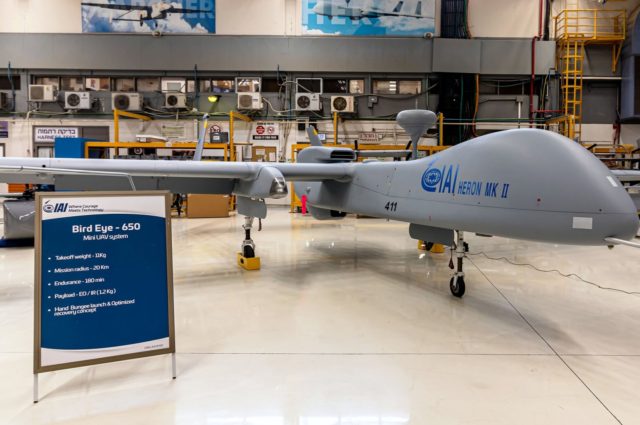 This UAV is part of IAI’s UAV family, and is designed based on IAI’s extensive, accumulated knowledge in the UAV field acquired over the course of nearly 50 years.

This cooperation agreement builds upon both IAI’s and IAR-Brasov’s vast experience in designing, manufacturing, assembling, and testing in order to develop the most advanced UAV Tactical Heron.

Following a transfer of knowledge, the design, production of components and their integration, assembly, and maintenance will all be completed in-house in Romania.

From component construction and assembly, to staff training and upgrade and maintenance, Romanian engineers and experts will be leading the development of the UAV.

EVP and General Manager of the Military Aircraft Division at IAI, Moshe Levy: “I am excited to see the signing of the agreement with IAR-Brasov, one of the leading companies in Romania. We are witnessing an increasing global trend of ‘Make In’, where countries prefer to manufacture on their own instead of importing.

IAI aligns itself with this policy and collaborates with local companies around the world, in this instance Romania, an important country to which IAI strives to continue supplying the world’s finest UAV systems.”

General manager of IAR-Brasov, Gen lt. (r) Laurian Anastasof: “IAI is a major and reputable name at international level in aerospace and defense.

The signing of this agreement of cooperation between IAR-Brașov and IAI represents an important recognition from our partners of our value and expertise.

Our specialists recently visited IAI Malat facility and we are confident that the teaming agreement between IAR and IAI will bring value to both sides.

Production of UAVs such as the Tactical Heron, which incorporate the latest technologies worldwide, at IAR Brașov, will be a major plus for our company business and for the image and reputation of the Romanian defense industry in general.”

The Tactical Heron is an industry-leading advanced and innovative tactical UAV, with highly-developed performance capabilities. The Heron boasts one of the highest rankings in flight safety and reliability in the world and is able to operate in extreme weather conditions.

In addition, it has a state-of-the-art engine, licensed and proven, and reaches a maximal flight altitude of 24,000 feet, a speed of 120 knots and a payload of 180 kilograms.

This UAV can simultaneously carry several payloads, and is equipped with IAI’s finest sensors. The Tactical Heron meets the world’s accepted standards and regulations, and the requirements of NATO’s STANAG 4671.

Israel Aerospace Industries has extensive knowledge and experience in the field of UAVs, accumulated over almost 50 years of activity, which amount to nearly 2 million flight hours and more than 50 operational customers around the world.

This is part of IAI’s DNA as a national and global focal point of technological knowhow in the field of air defense, radars, satellites, remotely controlled aircraft, flight and cyber.