The new backbone of Brazilian Air Force Transport Aviation (FAB) will begin to take shape next year. Ala 11, in Rio de Janeiro (RJ), will receive the first two units of KC-390, the largest military aircraft ever developed and manufactured in Brazil.

As two prototypes advance in the testing campaign, the first series aircraft is already in production at the Embraer unit in Gavião Peixoto (SP).

“It is a very important project and is in the final stages of development. We should already have the aircraft operating in our organizations from the middle of next year, “says the Air Force Commander, Lieutenant-Brigadier Nivaldo Luiz Rossato.

The 28 units ordered will replace the C-130 Hercules fleet operated by the FAB since 1964. The new aircraft will perform missions such as operating on small runways in the Amazon, launching parachutists, refueling other aircraft in flight, landing in Antarctica and launching cargo in full flight, among others.

The cargo compartment of the KC-390 is 18.54 meters long, 3.45 wide and 2.95 high. Larger than a volleyball court (18.00 meters in length), the space is sufficient to accommodate large equipment, as well as armored vehicles, artillery pieces, armaments and even semi-attached aircraft. The Guarani armored personnel carrier, for example, fits inside the KC-390 cargo compartment.

80 equipped soldiers or 64 paratroopers may be taken in a troop transport configuration or 74 stretchers plus a medical team in an aero-medical evacuation configuration. The maximum weight for loads is 23 tons and there is also the possibility of carrying 26 tons if the weight is concentrated in the aircraft’s center of gravity. 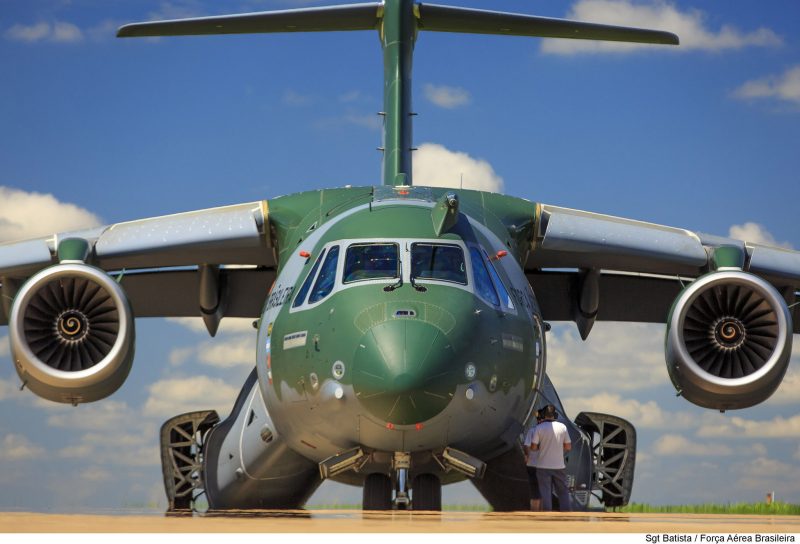 These numbers are achieved because the aircraft tanks can carry 23.2 tons of fuel, and the aircraft can also be refueled in flight. The KC-390 also has the necessary equipment to transfer part of the fuel to other airplanes and helicopters, and can perform two in-flight refueling operations at the same time. A KC-390 can also refuel another KC-390, extending the range of the second. Other “customers” should be the F-39 Gripen NG, F-5EM and A-1M (AMX) fighters.

Autonomy can also be used for search missions, with flight hours dedicated to the location of a shipwreck, for example. For this mission, in addition to counting observation stations, the KC-390 is equipped with the Gabbiano T20 radar. In target tracking mode, the device can track more than 200 vessels simultaneously and can also be used to combat illegal activities such as predatory fishing and piracy. You can also use radar to identify oil spots or map land areas.

“The KC-390 will be the backbone of the Brazilian Air Force’s transport aviation. From the Amazon to the Antarctic, the fleet of 28 aircraft will play a fundamental role for the most diverse projects of the Brazilian state, from scientific research to the maintenance of sovereignty”, explains the Commander of Aeronautics. “The importance of the KC-390 is explained not only by the ability to export and generate wealth, but the creation of 8,500 jobs,” adds Lieutenant-Brigadier Rossato.